‘I Voted My Heart’
Votes

‘I Voted My Heart’ 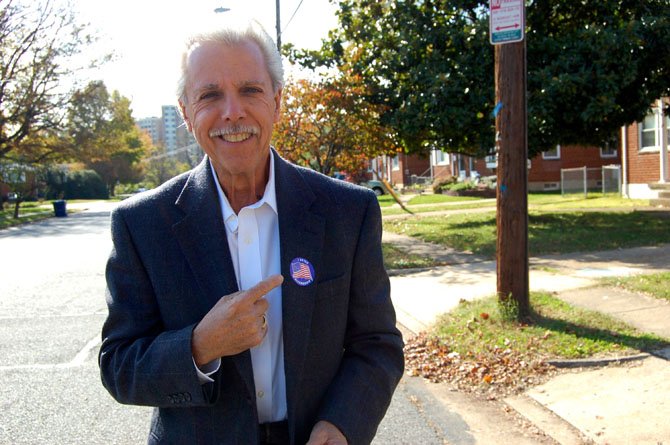 Pablo Rodriguez pointed at the "I Voted" button on his chest.

Alexandria — Nov. 6, 2012 was an important day for 74-year-old Pablo A. Rodriguez. He dressed himself up in a grey suit and a white shirt in the morning, then went to Agudas Achim Congregation with his son-in-law and grandson to cast his ballots. After voting, Rodriguez went outside the polling place and took a picture of himself pointing at the “I voted” button on his chest.

This was the first time that Rodriguez could be able to vote for a U.S. president. He waited for this day for half a century.

“I was really excited because it was my first time,” Rodriguez said. “And I voted my heart.”

Rodriguez was born in Havana, Cuba. It’s a beautiful place where 300 days of a year are sunny, he recalls. When the Cuba Revolution broke out, he was a freshman studying medicine. Later, Rodriguez’s school was shut down as the situation became worse. His father decided to let him go to Washington, D.C. to stay with his brother for a while. In February 1958, 19-year-old Rodriguez left his country. 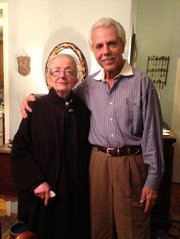 The capital city welcomed Rodriguez with 14 inches of snow. “My brother left for work during the day, I was in his house all day by myself. I couldn’t go out because it’s so cold. I knew English. I could read it, I could write it, but the speaking part was hard,” he said.

Later, Rodriguez went to a program called Americanization, where he learned about U.S. history and geography; and more importantly, he met his wife Gisela Ullmann, a German young girl who came to the U.S. as a tourist. They fell in love and married a year later, and have lived in Alexandria since then.

“All those years, I paid taxes but I was not allowed to vote,” Rodriguez continued. “One of my co-workers became a U.S. citizen earlier than me. I said to him ‘It’s wonderful. Now you can vote.’ But he said, ‘To vote? No. That’s not important.’ I told him ‘You’re an idiot. It’s your country now. One vote counts.’”

“People were treated like third-class citizens in Cuba,” Rodriguez continued. “I never voted there. I like America because of the freedom. You can say ‘I don’t like Obama’ and you don’t need to worry about there’s somebody upstairs listening and going to tell the police, ‘Oh, Pablo doesn’t like the President.’ You know your family is safe here. They won’t be put into jail for talking about politics.”

Being unable to vote himself, Rodriguez encouraged his two daughters to perform their civic duty.

“When my sister and I turned 18 and could vote, my father strongly encouraged us to participate in the democratic process and educated us on candidates and issues,” said Diana Rodriguez. “Even before he had the right to vote, he believed in the importance of it and valued the freedom to do so.”

Rodriguez applied for green card right after he retired in 1999. Five years later, he obtained the permanent residency. And it took him another five years to finally become a U.S. citizen in 2009. Since then, he has voted for City Council and members of Congress.

“I was at the ceremony when my father became a citizen in March of 2009,” Diana Rodriguez said. “And I have continued to be so proud of his attitude towards voting and exercising his right to participate in the electoral process. Proud doesn't even cover what I feel.”

Rodriguez always follows politics. “The Democratic Party is the lesser of two evils,” he said. “Both parties have problems. Nothing is perfect. Clinton did a good job and left a lot of money. Obama inherited big deficit … from the Bush administration. Now little by little, it’s getting better. He did the best he could. So I voted for Obama. I hope he could do a better job.”

On the election day, Rodriguez went to the polling site with his son-in-law Jonathan Dols and his 8-year-old grandson.

“We live in the same precinct so we planned to go together,” said Dols. “My father-in-law was very proud. His home country Cuba is ruled by a dictator and he’s been looking forward to voting for a long time. It’s really important for him to be able to vote for a U.S. president for the first time. It’s very emotional for him as well. I brought my son with us because I think his grandfather sets a good example. And I wanted him to see his dad and his grandfather voting. It’s definitely something important in our family.”

On the night of the election day, Rodriguez and his wife watched TV and waited to see the result until 1:30 a.m. “At the beginning when the result was coming out, I was really worried when I saw Romney getting more states,” he said. “But he lost eventually.”

Diana Rodriguez said her father is an honest and concerned citizen who gives back to the country that provides him a home. He is a living example for all Americans to take advantage of their right to make a difference, she said.