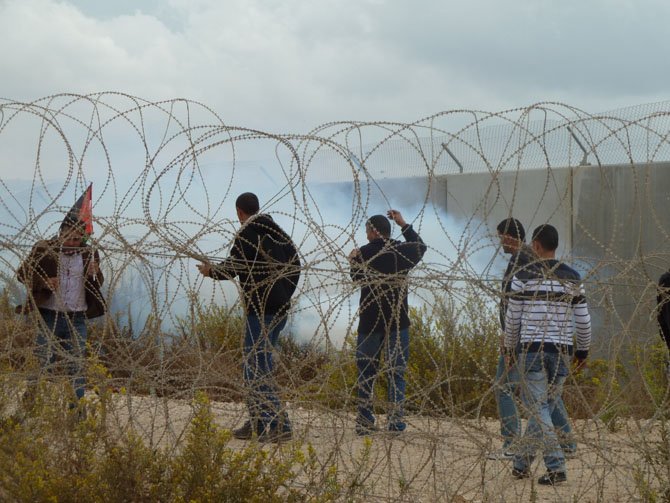 Tear gas at a weekly protest demonstration against the Israeli occupation.

I returned to Arlington from Tel Aviv during the barrage of rockets from Gaza before the pre-Thanksgiving cease-fire. Thanks to Israel’s “Iron Dome” missile shield, the rockets were destroyed in midair over Tel Aviv, and my flight took off on schedule.

I was deeply disturbed by what I saw and heard in four weeks in Israel/Palestine on a fact-finding delegation of a D.C.-based group called Interfaith Peace Builders, and volunteering with the International Solidarity Movement. The visit convinced me that the underlying cause of violence in the Holy Land is Israel’s persistent violation of Palestinians’ human rights.

In one West Bank village, the scene of weekly protest demonstrations, a Palestinian woman named Manal told me, “The Israeli soldiers fire tear gas in my windows before breakfast every morning.” She showed us a video with horrifying and heartrending images of soldiers beating women and children, a boy screaming after being shot with pepper spray in his eyes, and an observer being dragged into custody. We saw a picture of the bloody wound of her own 12-year-old son, who [she said] was shot in the side with a high velocity tear gas canister, and sustained liver damage. Manal has spent 10 days in jail; her husband has been arrested four times and had his camera broken. Despite the daily violence, she says they have power from within to keep resisting until the occupation ends.

While observing a similar weekly demonstration at another village I was nearly overcome by tear gas. Although I was 50 yards away, I felt blinded, disoriented, and suffocated for a few minutes. A tear gas canister struck my shoe and left a mark on it, but did not hurt my foot. Bil’in has been protesting for eight years against the separation wall, which took about half the town's land. As a result of the demonstrations, plus litigation, Israel moved the wall, but the town still has lost 250 acres of its land. Leaders say the protests will continue, because their goal is to end the occupation.

In a third village, another international volunteer and I locked ourselves inside a Palestinian home that the owner asked us to protect against further vandalism by Israeli settlers. When we refused to admit three armed soldiers, acting on the owner’s instructions, they threatened to bomb the door open. Fortunately for us, they did not do it.

I met nomadic Bedouins who said they face forced relocation to make way for ever-expanding Israeli settlements. The Bedouins said settlers killed and maimed their children by luring them with toys attached to booby traps, then made the parents pay fines for trespassing. Farmers south of Hebron told me settlers poisoned their sheep and took over their springs. In Hebron, I saw the nets Palestinians had to install over their market to protect themselves from settlers’ dumped garbage, and the hundreds of shops closed in the name of security. Palestinian families in several areas recounted interminable legal battles to keep their land. Some had their homes demolished by Israeli authorities. Palestinians are harassed, intimidated, and humiliated at Israeli checkpoints. Israel’s “security fence,” which the Palestinians call an apartheid barrier, causes personal suffering and hardship for those who cannot reach their fields or visit family members on the other side.

I was shocked by the extent of militarization of Israel. There were gun-toting young soldiers everywhere, and I saw images of children fondling machine guns, and kindergarten books to teach children their numbers by counting tanks and weapons.

I did see signs of hope amidst the pervasive panorama of human rights abuses of Palestinians. We drove by the Oasis of Peace, a village of 50 families of Jews and Palestinian Arabs of Israeli citizenship. They live together in a community based on mutual acceptance, respect, and cooperation. I also visited a town of more than 10,000 inhabitants called Isifiya, near Haifa in northern Israel, where four religious groups live together in harmony — the Druze (a secret religion that started as a sect of Islam), Muslims, Christians, and Jews. If it can happen there, why not elsewhere?

George Meek, a retired radio journalist with the Voice of America, is an elder at Trinity Presbyterian Church in Arlington and volunteers with various local groups. For more on his recent experiences in Israel/Palestine, see his Palestine Journal at http://seekpeaceinpalestine.blogspot.com