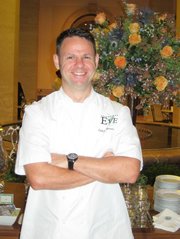 Chef Cathal Armstrong debuts his menu for The National Gallery of Art's Garden Café at a reception Oct. 2. The signature dishes will be featured for the next year in celebration of the new Masterpieces of American Furniture exhibit.

“When they told me what the exhibit would be, I knew immediately what I would do for a menu,” said Armstrong of the menu specially designed as part of the gallery's themed Garden Café series. “The furniture in this exhibit is classic American so I wanted to do something that identifies with American cuisine.”

The themed menu, which includes candied walnuts and grapes, a roasted butternut squash salad, pot roast, turkey pot pie and apple and Georgia pecan pies, will be featured in the café of the West Building of the gallery for the next year, with seasonal changes made “two or three times,” according to Armstrong.

“I will have a summer and fall menu and make other changes according to the seasons,” said Armstrong, who worked three days a week since mid-summer with gallery chefs. “I showed the chefs here how to execute the menu and myself or one of my chefs will be here at least once a week to oversee the food preparation.”

The gallery debuted themed cafes in 2006 with starred chefs from Provence for the Cézanne in Provence exhibition. Signature dishes by Jean Claude LeLan, formerly of Le Refuge in Old Town, were featured in 2008 during an exhibit of painters and photographers from the Fontainebleau region of France.

“When they told me what the exhibit would be, I knew immediately what I would do for a menu.” — Alexandria Chef Cathal Armstrong on his menu for the National Gallery of Art's Garden Café.

“The restaurant scene in and around D.C. has risen to such heights that we are able to pull from local talent who offer a wide spectrum of world cuisine,” said Deborah Ziska, chief of public information for the gallery. “Not only are they talented, they are generous with their time and their recipes, which we provide to our patrons as souvenirs of their visit to the café and the exhibition.”

Armstrong is chef and owner of Alexandria's Restaurant Eve as well as Eamonn's A Dublin Chipper, PX, The Majestic, Virtue Feed and Grain and Society Fair. His Garden Café menu is presented in partnership with Restaurant Associates and Executive Chef David Rogers at the National Gallery of Art.

“It's exciting for me to be here today,” Armstrong said. “When I first came to America I worked in an Irish pub, but I am very proud to be an American it's a real honor to be asked to create these signature American dishes.”

For more information on the National Gallery of Art and its exhibits, visit www.nga.gov.