Some argue amendment fails to increase property owner’s protections, but may shut down popular parades. 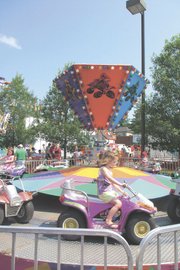 Some local lawmakers are concerned that if the Constitutional amendment ballot question on eminent domain passes, festivals and parades, such as Viva Vienna and the City of Fairfax Fall Festival, will spark countless lawsuits from business owners who could argue that the public events cost them private profits.

In 2007, responding to a populist backlash against a Supreme Court decision allowing the government to use the power of eminent domain to aid private development, Virginia legislators passed a law restricting that power.

Now a measure on the Nov. 6 ballot seeks to enshrine those restrictions in the Virginia Constitution, and provide additional areas of compensation to landowners.

Many local lawmakers question the wisdom of incorporating these provisions into the constitution, where they say it will be difficult to change, and may lead to "unintended consequences."

"A shop owner could complain they lost revenue, that festival vendors are taking their business away….What if someone decided to make that an issue and seek compensation for lost profits under (the amendment)? The Town of Vienna can’t afford to reimburse every shop owner..."

"(The amendment) is fair…If they run a road and cut off your driveway to the point that no one can get into your restaurant and ruin your business, you should be compensated."

"This is not something that belongs in the Constitution," said Del. Scott Surovell, (D-44), who wrote about issue in his Sept. 29 online newsletter, "The Dixie Pig." "The language in this amendment is completely unnecessary — it bans actions currently illegal in Virginia."

TAXPAYERS SHOULD BE CONCERNED, say opponents of the amendment, which include Fairfax County’s Board of Supervisors, The City of Fairfax, The Virginia Association of Counties and the Virginia Municipal league.

They argue the amendment goes too far, requiring taxpayers to compensate landowners not only for the value of condemned property, but for lost access to their property and lost benefits.

They contend the proposed amendment invalidates the current "public use" definition in the code and creates uncertainty as to what constitutes public use, which could invite litigation.

"I don’t think anyone’s arguing that private property owner’s rights are not important," said City of Fairfax Councilman Dan Drummond. "But this is a solution in search of a problem."

He said the fear is that the amendment could have a "chilling effect" on economic progress and projects that benefit the public.

"Nobody really knows from a local government perspective how this will be used, but the fear is that it could open up a Pandora’s Box of litigation that would leave taxpayers footing the bill."

Fairfax County Board of Supervisors Chairman Sharon Bulova (D-at-large) said business-owners could construe this amendment as "taking away or diminishing" their profits when streets are closed and their shops are shut down during popular parades and festivals, such as Viva Vienna or the City of Fairfax Fall Festival, events that attract up to 40,000 people during one weekend.

"These are community-building events, and we’re concerned the language in the amendment can be read by individuals as way to seek compensation for lost profits," Bulova said.

"A shop owner could complain they lost revenue, that festival vendors are taking their business away," Bulova added. "What if someone decided to make that an issue and seek compensation for lost profits under (the amendment)? The Town of Vienna can’t afford to reimburse every shop owner ..."

Surovell said requiring the government to pay for not only the value of land, but for lost profits and lost access could run up the costs of infrastructure projects all over Virginia.

"Imagine what that means for widening U.S. 1 or what they would have meant in terms of the disruption caused on Route 7 for the construction of the Silver Line. This bill will make roads and transit even harder to construct," he said.

Del. Dave Albo (R-41) who co-sponsored one of the versions of the law, acknowledged that "lost profits and lost access" could end up making roads more expensive to build.

"But it’s fair," Albo said. "If they run a road and cut off your driveway to the point that no one can get into your restaurant and ruin your business, you should be compensated."

"Basically, we don't want the government taking private property for something that is not a bona fide government use, for example taking old houses in the name of economic development and then transferring the land to a private hotel," Albo added.

ALBO AND OTHER SUPPORTERS maintain a constitutional amendment is needed because, without it, future lawmakers and special interest groups could weaken Virginia’s current statute.

At the crux of the debate is the Supreme Court’s landmark 2005 decision known as the "Kelo decision," widely considered by scholars, land-use attorneys and local government to be one of the most controversial rulings in recent U.S. history.

"I think all of this is an overreaction to Kelo," said Toni-Michelle Travis, a GMU associate professor of government and politics and editor of "The Almanac of Virginia Politics." "Historically, property owners have always been favored under Virginia law."

What Is the "Kelo" Ruling?

"Kelo v. City of New London" came before the Supreme Court in 2005. In a 5–4 decision, the Court held that the general benefits a community enjoyed from economic growth qualified private redevelopment plans as a permissible "public use" under the Takings Clause of the Fifth Amendment.

In 1998, the drug company Pfizer built a new plant in New London, Conn., making adjacent property desirable for economic development. Although 100 property owners agreed to sell the city their property for commercial development, 15 property owners resisted, and the city used the power of eminent domain to force the 15 holdouts to sell.

The property owners, including lead plaintiff Susette Kelo, sued the city in Connecticut courts, arguing that the city had misused its eminent domain power.

Prior to Kelo, only seven states specifically restricted the use of eminent domain for private development.

As of June 2012, 44 states had enacted some type of reform legislation in response to the Kelo decision, according to the National Conference of State Legislatures. Of those states, 22 passed laws that severely inhibited the takings allowed by the Kelo decision, while the rest enacted laws that place some limits on the power of municipalities to invoke eminent domain for economic development.

State Sen. Chap Petersen (D-34), who is Surovell’s law partner in the Fairfax firm of Surovell, Isaacs, Petersen & Levy PLC, said he stands with supporters of the amendment, and thinks that litigation fears are overblown.

"The eminent domain amendment basically puts the current state law into the Constitution, so it's not a major change at all," Petersen said.

"Eminent domain is a very heavy power and absolutely needed only for the greater good. We haven’t used it to force people off their property. That just doesn’t happen in Fairfax County and it never has," Bulova said.