Reston — The Fairfax County Park Authority opened the Lake Fairfax Skatepark Saturday, Oct. 27, welcoming hundreds of skaters to one of the biggest parks in the area. The 15,000 square-foot features a large bowl on one end, and more than a dozen other features made of concrete with steel edges. 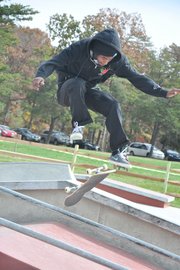 “I think this is the best skate park in Northern Virginia by far,” said Diego Patrick, 16, of Manassas Park. “It’s the concrete plaza skaters all over have been waiting for.”

Patrick is sponsored by N8IV Concepts, a skating brand, one of several companies that came out to celebrate the park’s opening. More than a dozen members of Infected Skateboards, a company started by brothers Gabe and Julian David, were among the first to try out the park.

“There’s so much here, it’s like something you’d see in a video game,” said Josh Harris, 19. “It was designed really well, and very creatively.”

The park was designed by Spohn Rank Skateparks, which is based in California. The streetscape- inspired design features what is known as “skateable art,” which includes pieces that have a high aesthetic value, but can also be skated on.

“I think it does a great job of putting out features for skaters of all levels,” said Julie Carr of Herndon, whose son is an active skater. “My son went to a few of the public input meetings, so he wanted to be here today, but I was nervous that it would only be for skaters with years of experience, but he’s having a great time.”

BMX bike rider Jared Farhan of Herndon said he thinks the large size of the park makes it more accessible to all.

“I like the Herndon park, but it’s a bit small, and when I ride my bike around the bowl it can feel a little bit tight, and I get nervous, because if I hit someone, they could get hurt,” he said. “But this has a lot more open space, which helps you steer clear of others, and I feel like I have room for all the tricks I need.”

Ray Venzor, 17, slides along a rail, one of the features at the new skate park at Lake Fairfax Saturday, Oct. 27.

The skate park broke ground in June after almost a year of planning that involved several early designs and a change of location within the park.

“We have one skate park already, at Wakefield Park, but we’re a big County, there are lots of skaters,” said Supervisor Cathy Hudgins (D-Hunter Mill). “We tell the kids not to skate on the sidewalks, to get off the banisters, get off the sidewalks, but we didn’t tell them where to go. Now we do, and I think this is a great addition to Lake Fairfax Park.”

The cost of the park was about $1 million, financed through park bonds. It is located next to the athletic fields and campgrounds.