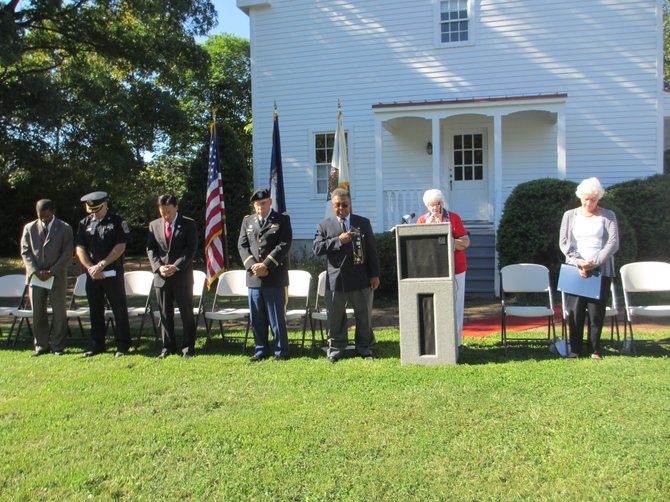 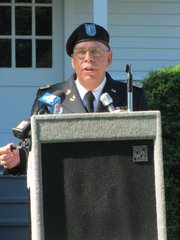 Sept. 11, 2012, was eerily similar to the warm, sunny day 11 years ago when terrorists hijacked four American jetliners, slamming them into buildings and the ground. As much of a day of infamy as was the attack on Pearl Harbor, Sept. 11 is commemorated every year throughout the United States. And every year, Vienna’s American Legion Post 180 partners with the Town of Vienna to honor the memory of the dead, the bravery of the day’s heroes and the sacrifices of those Americans actively battling terrorism daily.

Called “A Day to Remember” by order of the town council, the 2012 program began with a brief ringing of the bells at Vienna Presbyterian Church at 9:37 a.m., followed by 13 minutes of bells starting at 9:45 a.m. At ten, a police color guard crossed along Freeman House and presented the colors, followed by the Pledge of Allegiance and the singing of the Star Spangled Banner by the Vienna Choral Society.

Mayor M. Jane Seeman, on behalf of the Vienna Town Council, read the order proclaiming Sept. 11, 2012, as “A Day to Remember.”

Guests stand at attention as the colors are presented by the Town of Vienna Police Honor Guard.

“We always want to remember what happened that day and how we felt, how we began to think about our family and friends and how much we love them,” said Vienna Town Manager Mercury Payton.

Post 180 Commander Ron Patterson introduced the keynote speaker, Mark W. Mishoe, chief warrant officer five with the Army National Guard. Mishoe focused on personal stories of those working at the Pentagon 11 years ago. A Pentagon colleague of Mishoe’s, identified only as “Charlie,” brought out an injured co-worker on a rolling chair to be treated by medics. Mishoe’s stories reflected the heroics of ordinary people and the humanity brought down by the attack.

Commander Patterson read an anonymous commentary on the “power of one,” emphasizing the unity Americans exhibited after the Sept. 11, 2001, attacks. “We became one family as we mourned together the great loss,” Patterson read.

Commemorative programs, said Shirley Martin of Auxiliary 180, make everyone remember what happened that day, how patriotic everyone was. “We need to keep that togetherness going,” said Martin. Hatter added, “So people can remember not only what happened, but to keep it in our hearts that we’re all family.”