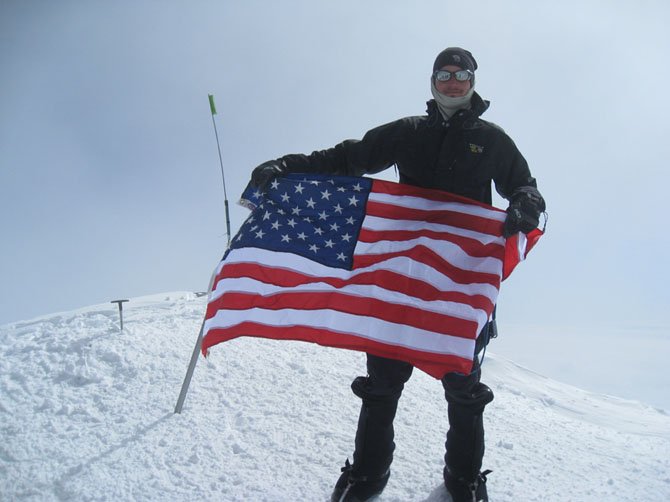 Brian DeMocker, of McLean, displaying the USA colors at the Denali summit in Alaska, July 1, 2012 at 20,320 feet. Photo Contributed

For Brian DeMocker, of McLean, being high means being on a mountaintop above 14,000 feet. Up until this summer, he’d reached that elevation 15 times, mostly in Colorado. But on July 1 of this year, he conquered the 20,320 foot summit of Denali in Alaska, the highest point in North America.

Denali isn’t the tallest mountain in the world—that honor goes to Mt. Everest at 29,029 feet, but it is one of the most challenging to climb. It boasts the most northern latitude of any mountain above 20,000 feet, which means the available oxygen is lower than on other mountains of comparable height. But the biggest challenge is the weather. At the summit, Denali has one of the harshest year-round temperature averages of anywhere on earth, with extreme cold and fierce wind. There are also frequent blizzards and avalanches, even through the summer months. This year, while the lower 48 states were experiencing record heat, Alaska was setting a record for snow accumulation.

Denali is also a demanding mountain in terms of elevation gain for climbers: 18,000 feet from base to summit, with a required ascent of some 12,000 feet, more than any other mountain, including Everest. And, unlike on other world class mountains, there are no porters or mules to help with the load. Climbers carry up to 60 pounds of gear on their backs while dragging 40 pounds on sleds. Most teams attempting Denali spend around three weeks on the mountain.

In 2012, according to Denali National Park statistics, only 40 percent of climbers who attempted to summit the mountain accomplished that feat (the lowest percentage in 13 years), due primarily to the heavy snowfall and severe weather. On June 13, the day before Brian began his ascent, four Japanese climbers were killed on the part of the mountain called Motorcycle Hill when an avalanche swept them into a crevasse, bringing to six the number of climbers killed attempting to summit during the 2012 climbing season. Seven climbers died in 2011.

BRIAN’S JOURNEY began during the spring of 2011, his junior year in high school, when he set his sights on summiting the 20,000 foot mountain before he matriculated in college. The requirements were daunting, including the need to attain peak fitness, acquire the necessary technical skills (use of crampons, ice axe and fixed lines; crevasse rescue; self-arrest; snow camping; and glissade and glacier movement, among others) and, of course, amassing the requisite funds.

But Brian was unfazed. In 2011, he signed up for a Denali preparation course on Mt. Rainier with an outfitter called Alpine Ascents out of Seattle, Wash. During the summer after his junior year in high school, he flew to Washington State, completed the course, and had his skills certified to take on the big mountain.

The next step was to develop an intensive exercise regime. Brian was on the varsity swim team at Flint Hill School and was swimming five days a week. To that, he added a cross training program that involved cycling, running, lifting and dragging on the W&OD trail several tires he was given by McLean Automotive to simulate pulling the sleds on Denali.

Eventually, there was the question of money. Brian had a job coaching the winter swim program for the Langley Swim Club both his junior and senior year in school. He worked for the aquatics program at Madeira’s Camp Greenway during the summer of 2011. He started a dog walking business in Langley Oaks. His senior year, he added a job at the Tysons Corner Center California Pizza Kitchen to earn the funds he would need to pay for gear, airfare, lodging, Denali National Park fees and to cover the costs of using Alpine Ascents again as his outfitter.

Brian flew from Dulles to Anchorage on June 12. He caught a ride on a shuttle to Talkeetna, the staging ground for all trips up the mountain. There he met up with his Alpine Ascents team, a group of five other climbers and two guides. Brian was by far the youngest member of the team. Alpine Ascents is one of six outfitters authorized to run ascents up Denali. The main climbing season on Denali runs for about seven weeks from May through July. Alpine Ascents sends one team every Tuesday and Thursday for each of those seven weeks. Brian was on Team 11.

Brian’s team rose early on June 14 and headed for a warehouse to carry out a gear check and apportion group rations. They then hopped aboard an Otter turboprop for a flight to the 7,500 foot Base Camp on the Kahiltna glacier, which offered the first close up views of the spectacular Alaska Range.

THE FIRST NIGHT on the glacier, Brian and his teammates had to adjust to the constant daylight that is a feature of trips on Denali during the summer climbing season. The first legs of the ascent, which involve crossing the glacier, take place at night to ensure the ice is cold and solid. The solar gain of the day can weaken the snow bridges, even when the temperatures are frigid, raising the possibility that a random step can punch through and send the climber into a crevasse below. Climbers always travel in rope teams, precisely to support each other should such an event occur.

Brian DeMocker, of McLean, pushing hard on the fixed lines of the headwall, 900 feet of 45-50 degree snow and ice, behind a guide and another client.

The first eight days, climbers pull sleds of gear and food. They use a technique called cache and carry where they carry half their gear to the next higher point on the itinerary, and then descend back to the original camp to sleep. They then move to their next camp up the mountain and retrieve the gear in the cache. Climbing up and down in this manner allows them to acclimatize to the altitude better, as well as to lighten the load.

Leaving base camp on June 15, Team 11 climbed to Camp 1 at 7,800 feet where they spent a day reviewing technical skills. During the next few weeks, they carried loads up Ski Hill, Motorcycle Hill and around Windy Corner setting their caches high and sleeping low until they reached Camp 3 at 14,200 feet. Passing around Windy Corner presented the climbers with gorgeous panoramic views of the surrounding peaks and the Kahiltna Glacier 4,000 feet below.

Most days, the weather was a brisk 10 degrees during the day and sometimes below zero at night. Many days were cold and sunny but there were frequent flurries, especially at night. Some nights they got up to nine inches of snow.

While Team 11 was moving up to Camp 3 in fairly good weather, the teams one week ahead of them were having a more challenging experience. Blizzard conditions were blanketing the upper mountain. Most of the teams at the higher elevations collected at high camp, waiting for the snow and winds to abate, and for a weather window that would allow a summit attempt. Unfortunately, the system stalled and most teams scheduled to summit that week were forced to abandon their attempts on account of poor weather.

Meanwhile, Team 11 was ascending to 15,000 feet, where the fixed lines begin, to leave a cache and return to spend the night at Camp 3. After that push, one team member in Brian’s group was severely affected by the altitude, and decided she could not continue. The guides arranged for her to join another Alpine Ascents team on descent. Coincidently that same day, all but one of the climbers on Team 10 also decided they needed to turn around, leaving their remaining healthy climber to join up with Brian’s team.

The next day, a recomposed Team 11 struck off to carry gear up to 16,500 feet. They left Camp 3 and returned to the base of the fixed lines. Using ascenders to self-belay, they climbed the headwall, which consists of 900 feet of 45-50 degree snow and ice up to the crest of the West Buttress. They left their cache and descended back to Camp 3 for the night. The following day, they climbed the fixed lines again but, at the top of the headwall, another climber in Brian’s group was struggling with the altitude and could not continue. One guide and one client escorted the ailing climber back down to Camp 3, with the intention that the two would rejoin the main group the next day. Brian, one guide, and the three other climbers continued on to high camp (Camp 4 at 17,200 feet), following the exposed ridge 600 feet up and around Washburn’s Tower.

Brian DeMocker, of McLean, overlooking the cliff at High Camp (17,200) towards the landscape of Alaska.

The next day they rested and waited for their other team members, but the two climbers did not return. They had struggled in serious snow and avalanche conditions on their descent to Camp 3 and were not in condition to attempt the two most difficult climbing days of the trip. Brian’s team used the extra day at 17,200 feet to prepare for the summit attempt.

ON JULY 1, SUMMIT DAY, the sun was shining. Team 11 traversed the steep snow face of the Autobahn to Denali pass. From there they crossed a large plateau at 19,400 feet, known as the “football field” and then climbed to the crest of the summit ridge towering over the massive 8,000 foot South Face. The last push involved negotiating the knife-edge ridge another 300 feet to the top of North America. After a demanding seven hour summit day, following a strenuous 18 days on the mountain, they were finally rewarded with one of the most impressive 360 degree views in the world, covering the entire Alaska range.

Tired but exhilarated, the team returned to high camp for the night. Two days later, they were back at the base camp on the glacier, waiting for their Otter to return to Talkeetna. Unfortunately, a fog had set in and the planes were not flying. Team 11 pitched their tents and spent the night on the glacier instead of in a bed. Early the next morning they were awakened to a call, “The plane is coming! Grab your snowshoes and stomp out the runway for landing!”

Brian DeMocker, of McLean, won the rock-paper-scissors contest to fly co-pilot in the Otter Turbo prop flight from the Kahiltna Glacier to Talkeetna.

Back in Talkeetna, finally, Team 11 celebrated. The accommodations felt luxurious: a shower, a chicken sandwich and fries, and clean sheets. The next day, Brian took the shuttle back to Anchorage and the red eye back to Virginia. It was his 19th birthday.

Unfortunately, the blizzard lingered high on the mountain. Over the next few days, virtually every team on the mountain had gathered at Camp 3 as it was too dangerous to move higher up. One by one, as teams ran low on food and fuel, they were forced to descend. None of the three Alpine Ascents teams following Team 11 summited this year.

Brian has just started his first year of college at the University of Colorado Boulder where there are plenty of mountains awaiting him.