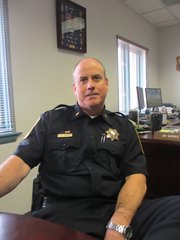 “Vienna is known as a close community. I want to walk the streets, get out and meet people, answer questions. This is a great place to do that.”

As the weather grows warmer, you’ll see new Vienna Police Chief James “Jim” Morris walking the streets of town, introducing himself and greeting local people and local businesses. The intimacy of Vienna, the small-town feel, are some of the town’s attributes that attracted Morris to the police department here. And now that he has taken over the position vacated by former chief Robert Carlisle, Morris is happy with his decision to move from the Fairfax County Police Department to the Town of Vienna’s.

“Vienna was always a known-commodity to me,” said Morris, “and when Bob (former Chief Robert Carlisle) left, I knew it was a unique opportunity I couldn’t ignore.”

Morris, who lives in the Gainesville/Warrenton area, drives in to Vienna early every morning since taking over on March 25, usually by 7 a.m., to see the shifts change and talk to his officers and staff. “I really like the intimacy of a department and community this size,” said Morris, referring to a police force of about 40 sworn officers and support staff of about 20 more people.

Morris served with the Fairfax County Police Department for 24 years, working his way from patrol officer to commander of Internal Affairs, to acting chief of police and deputy chief of investigations and operations. He went through the academy with former Vienna Police PIO Bill Murray and Vienna motorcycle officer Eric Hall. He knows Carlisle from his days at the McLean police station. It’s that kind of familiarity that attracted Morris to Vienna.

Morris was one of 108 candidates for Vienna police chief and Town Manager Mercury Payton, who hired Morris, described Morris as a “strong leader with high integrity.”

Morris spent his first week—his first day on the job was March 25—meeting with officers and town officials. He’s looking forward to meeting residents and business owners and is not surprised by the support the police department has from residents. As chief of police, Morris said he has to look at issues from policy to looking out for his officers, making sure they have what they need to serve the community.

The new police chief is married and has three children: a daughter, 18, a student at Christopher Newport University; another daughter, 16, a high school junior; and a son in fifth grade.

Morris believes in community policing, and the size and layout of Vienna is conducive to officers making themselves known to businesses, schools and residents. He plans on getting to know the community as he settles in to his new responsibilities, very soon he hopes.

“I’m honored to be here,” said Morris. “Everyone has been so friendly, so nice, in the department and in the community.” As spring sticks its heels into the ground, so will Chief Morris. “Vienna is known as a close community. I want to walk the streets, get out and meet people, answer questions. This is a great place to do that.

“That’s what I love about being here.”