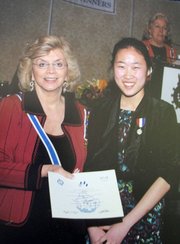 Claire Wang, a junior at Trinity Christian School (TCS) of Fairfax, won the state level Christopher Columbus Essay Contest sponsored by the Virginia Daughters of the American Revolution. Claire competed with 147 other essayists from across the state, writing on the topic "How Did the Faith and Courage of Christopher Columbus Give to Mankind a New World?"

She received her award from the Virginia State Regent Patricia Musick Hatfield at the Annual Virginia State DAR Youth Luncheon held in Richmond on March 16. TCS was represented at the luncheon by R. Cody Phillips, upper school history teacher and school essay contest coordinator. Claire's essay was sponsored by the Pentagon Chapter, NSDAR. The National Society DAR and National Italian American Foundation have jointly sponsored a nation-wide essay contest on Christopher Columbus each year since 1996. The contest is open to students in grades nine through 12 in public, private or parochial schools, or those who are home-schooled.