‘Rumors’ Arriving at the Alden
Votes

‘Rumors’ Arriving at the Alden 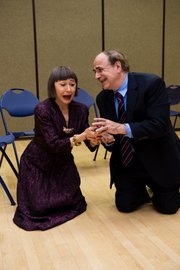 Cookie Cusack (Joan Zeigler) and Ernie Cusack (Steven Rosenthal) on the floor looking for earrings in the McLean Community Players production of “Rumors.”

The word farce conjures up frenetic energy, slamming doors, any number of wacky situations and characters to match. To rid audiences of any remaining winter blues or general funk, the McLean Community Players are bringing "Rumors," a Neil Simon farce about the upwardly mobile, professional classes to the Alden stage.

Director Rosemary Hartman noted that the comedy "is slightly different from most of Simon’s works because it is a farce, giving the actors an opportunity to perform in a slightly more exaggerated form. It is real people who are caught up in a ridiculous situation that makes them behave in a ridiculous manner.”

The basic set-up: four New York City couples find themselves in a rather messy situation that only gets worse with each passing moment. What was supposed to be a gathering to celebrate a 10th wedding anniversary goes quickly awry. This topsy-turvy, fleet comedy spins out of control into confusion, miscommunications and mis-directions with plenty of flirting, jealously, gunshots, pratfalls, body spasms, difficulty hearing, and other tomfoolery for the audience to behold, along with some fast-talking adult language sprinkled throughout.

Hartman described the Simon script as "just good theater for the audience to sit back and enjoy.” And along with the experience that comes with seeing a fast-paced farce “the audience will get to know the characters well. They are well-written, the play well-constructed."

Joan Zeigler and Steven Rosenthal will play "the Cusacks," one of the married couples in the production. Both have a long history with Simon plays. In a recent interview both mentioned their own New York roots for their personal connections with Simon. In "Rumors" they are a couple late-arrivers to the party. He is a "wounded" psychologist and she is considered "eccentric." Somehow, they unexpectedly prepare the dinner party dinner.

Rosenthal noted that Simon would write his comedies by bringing out humor from the real life pain people can sometimes face. Zeigler spoke of the constant frenetic pace of the production.

Inviting the audience to the production, Hartman and her cast said, "this is a great show to get someone out of any funk winter has left or other things going on. There are plenty of belly laughs to go around."