Celebration of Dreams and Expressions of Peace at Unity of Fairfax. 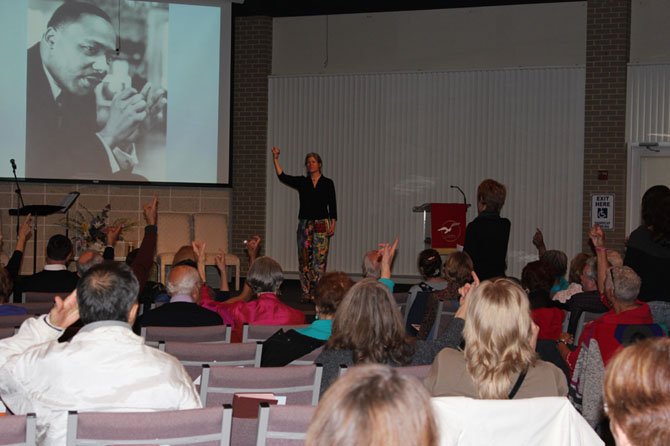 Mary Shapiro shows the crowd how to sign, “We are the dream,” after a video of Martin Luther King, Jr.’s “I Have A Dream” speech was played. 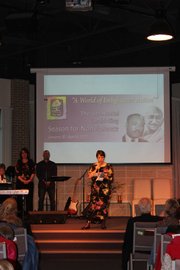 The closing ceremony attracted over 100 people of various ages, backgrounds and faiths to come together to inspire, honor and express their celebration for peace through music, dance, prayer and readings. Senior Minister Reverend Russell Heiland welcomed the crowd before passing the attention to New Day—a Unity of Fairfax band that was one of two live music performances presented on Saturday. 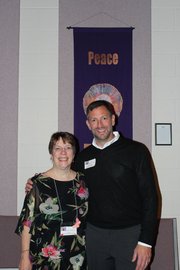 Season of Nonviolence Team Leader Donna N. Lee and Senior Minister Reverend Russell Heiland take a moment to pose for a picture in front of a banner displaying “Peace” as the Ceremony of Dreams and Expressions of Peace event began to wrap up on Saturday evening, April 6.

“The truth is we are jubilant everyday about peace in every day we are creating it,” Reverend Heiland said. “We create it with the thoughts we think, the words we use, the actions we take and the way in which we simply choose to be peacemakers in the world.”

The two-hour event also included excerpts from World Healing Meditation, a video of King’s “I Have a Dream” speech, readings of World Peace Prayers, and music from the diverse choir Mosaic Harmony—a powerfully energetic way to mark the end of the joyous occasion.

As the last act of the night, Mosaic Harmony took the stage to end the ceremony with three inspiring songs. The choir, which is comprised of 21 different faiths itself, sang with enthusiasm that got the audience on its feet.

“Peace is a power; it has to be more than a philosophy,” said Mosaic Harmony Director David North. “We not only just sing about it, but try to encourage one another to live it. The diversity of the evening was really beautiful. It showed people of different backgrounds singing the same song about how we need peace. That’s neat—to join together as a community, and to proclaim and affirm that together.” 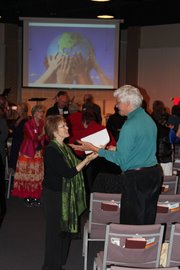 David Okerson of Reston and his wife Barbara face each other as they say “Da Ku O Nah”—a Malawi greeting by Massanho Banda that was taught to the audience by Mary Shapiro. The greeting translates, “I see you with my eyes, I see you with my heart, and I welcome you.”

The Season of Nonviolence, which ran from Jan. 30 to April 4 this year, was started by the Association of Global New Thought. While it was the first time in a few years that Unity of Fairfax took part in the campaign, Season of Nonviolence Team Leader Donna N. Lee was happy with the turnout—and she wasn’t the only one.

“I went to the opening ceremony and was really moved so I wanted to come tonight,” said Fairfax resident Charlene Brown. “[The Season of Nonviolence means] bringing awareness that people can live together in harmony and it starts with us—right here, right now.”

“Tonight was a way of saying we can do this,” said Reverend Heiland. “Regardless of any obstacle that has come before us, there is always an idea, always a way, to bridge that [obstacle] and move through it.”