Love Can Give Us Beauty
Votes

Love Can Give Us Beauty

An unusual intersection of time travel and live piano music will transport audiences between the life and times of the musical genius Beethoven and our own current days. It is a play about love, obsession, the chaos of creativity and prickliness as people try to cope when things go out of their control. 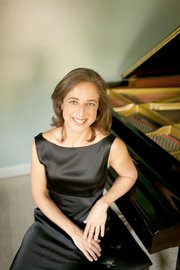 The play is "33 Variations" written by Moises Kaufman, who gave audiences "The Laramie Project." It is both a drama and a comedy underpinned by Beethoven's actual piano music. "It crosses periods of time to tweak the audiences curiosity and their intellect," said Sue Pinkman, director of the Reston Community Players' "33 Variations."

Pinkman wants the production to "mesmerize with its concepts and language, as people come to terms with their lives." A line that resonates is this as two characters speak, "we can recognize that we both love beauty. But neither of us can make it." The two know they are beholden to others to create beauty.

The play concurrently explores two different time periods on stage. The main characters are Ludwig van Beethoven dealing with his oncoming deafness and a modern-day devotee of Beethoven battling her own emotional and physical demons. Each is surrounded by family and friends, providing support to help them cope with what is befalling them.

The set will be unique, since it includes a grand piano straddling two parallel almost half-sets, representing the two different time periods of the play. The piano variations of a waltz will be performed by professional concert pianist Hilary Van Wagenen Henry. She will share the stage with the actors.

Sullivan found "the script and what the playwright explored so very interesting: how he wrote about the fleeting of time and our efforts to claim and reclaim our lives.”

Her character also changes physically over the course of the play and she worked to learn how physical ailments change a person's physical appearance and outlook.

McRae suggested audiences will find "the script quite fascinating in how it moves between the characters and time periods exposing us to so much that is out humanity."