One to Three Months To Live: Now What?
Votes

One to Three Months To Live: Now What?

Potomac resident writes of her triumph over diagnosis. 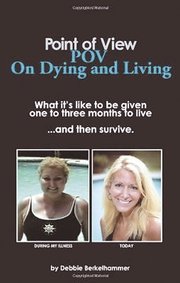 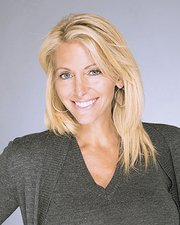 She returned to Potomac to die — a 30-year-old woman who had been given the diagnosis that she had a lethal non-cancerous cervical spinal cord tumor and would not live more than three months.

What is it like to be given this diagnosis — and then survive? How did she wake up each day with the strength and courage to fight the prognosis and still be able to be a wife and a mother to her three young sons? Potomac resident, Debbie Berkelhammer has written this story in her book, “Point of View: On Dying and Living,” — a recounting of her illness, grief and struggle with depression as well as the promises she made to herself if she beat the illness — and the triumph of her return to good health.

“I was in the hospital when my husband and best friend were told that I would not live beyond 1 – 3 months,” Berkelhammer said. “That was in August of 1996. The neurosurgeon opened me up — and then immediately closed me — and when I awoke, he told us that it was impossible to operate — and that I had virtually no time left.”

“My appearance had totally changed — I could not walk and could not even get out of bed by myself. When I fell, I couldn’t get back up. I lost my hair and I was swollen from the steroids. My husband took me home to my in-laws in Potomac to die.

“The doctors discovered that my tumor was a pediatric tumor that had been on my cervical spinal cord for a long time. My parents began searching the internet for doctors who were familiar with this type of tumor — and they found Dr. Fred Epstein. My husband and parents loaded me onto a mattress in the back of a Jeep Grand Cherokee and drove me to New York City — and into the care of Dr.Epstein — a doctor who simply said, ‘I will fix you.’”

Epstein operated and was able to remove all but 10 percent of the tumor, leaving her with partial numbness on the right side of her body. She has patiently taught herself to become left-handed and has painstakingly learned to type with her left hand.

Sixteen years later, Berkelhammer is a busy event planner, model, actress, wife and grandmother — and living each day to the fullest. She looks happy and healthy, even though she has been through an experience that left her a changed person.

“I made some important promises to myself, when I was bargaining for my life,” she said. “I decided that I will always view life positively. I am not going to judge other people. I will be more patient and not rush — and always follow my mantra to give myself a break. I will live each day of my life to the fullest — and most importantly, make time for the meaningful things in life — family and friends are the most important things in one’s life. I became ill so fast that I didn’t have time for a bucket list. I just wanted to hold my children close to me.”

Berkelhammer decided to write “Point of View: On Dying and Living” for many reasons. Even though the book took more than three years to write, reviewing and understanding the bleakest part of her life was therapeutic. “I wanted to share my story because my message is that even if you are at the darkest moments in your life, there is still some light. My favorite quote is from Audrey Hepburn who said ‘Nothing is impossible. The word itself says it all: I’m possible.’”

She also wanted to write the book to share with her children what she went through, since they were too young at the time to understand. “They are so appreciative,” she said. “They framed my book and gave it to me for a gift. I am lucky to be so close to them. They have always been my life. My darkest fear was that I wouldn’t be there for my kids.”

Berkelhammer will be participating in several book signings in the area. On April 21, she will be reading from her book at the Kensington Book Festival at 3 p.m. In May, Lacy Couture will be hosting a book signing and on Sept. 16 she will be at One More Page Books in Arlington, Va. “Point of View: On Dying and Living” sells for $15.99 at Barnes and Noble and Amazon.com. Signed copies can also be purchased directly from Berkelhammer at www.DebbieBerkelhammer.com. She is also available for speaking engagements.

“I just hope this book will help others and will inspire people to find that light, even if they are mired in illness, depression or the problems of life,” she said. “It’s so important to remain positive.”