‘A Sweet Story From a Simpler Time’
Votes

‘A Sweet Story From a Simpler Time’ 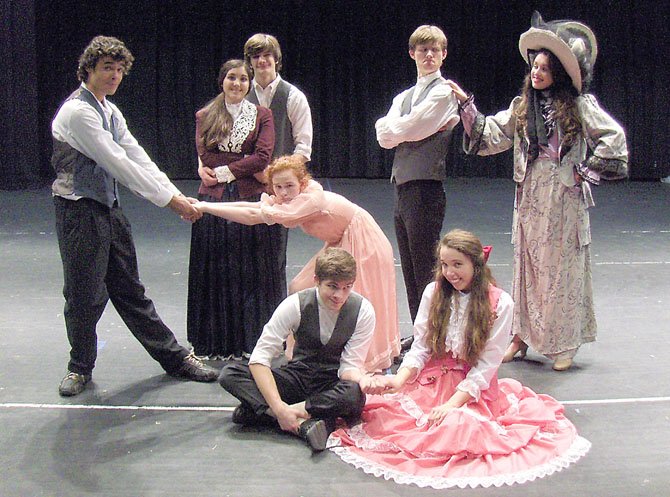 Rousing music and a tender romance in turn-of-the-century New York—Fairfax High’s FX Players bring it all to life in the musical, “Hello, Dolly.”

“It’s a sweet, innocent story from a simpler time, and I think something in all of us yearns for that simplicity and peace,” said Director Wendy Knight. “It’s about Dolly Levi, a matchmaker who takes control and arranges things. She does this for Horace Vandergelder, and he has no idea it’s going on. And I think every married couple in the audience will identify with it.” 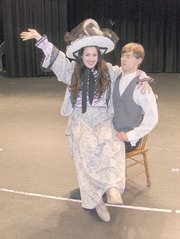 It’s the school’s Cappies show and the cast and crew of 35 have been rehearsing since January. “They’re so talented; we have great voices and actors,” said Knight. “And I’m letting the kids add in their own extra comic elements, which are awesome.”

The four student costumers “have been working from sunup to sundown, making and modifying the girls’ costumes from old prom dresses,” said Knight. “There are lots of ribbons, lace and layers of petticoats, blouses, jackets and skirts. We even have a crew making 60 fancy hats with birds, feathers, flowers and lace. Each ensemble member has at least four outfits and Horace and Dolly have even more.”

THE SCENES take place on the streets of New York and in Vandergelder’s feed store in Yonkers, a hat shop, restaurant and courtroom. Playing the lead is senior Alex Nicopoulos, who describes Dolly as “extremely dynamic in every way. She’s a wonderful human being who can be manipulative, at times. But in the end, it all turns out well because she has a master plan.”

Nicopoulos said Dolly’s “exuberant and in everyone’s business. She’s nosy, but inspiring to the other characters. She’s a widow getting back into life, herself, and it’s such an honor playing her. It’s terrifying, but also one of the greatest experiences I’ve had in high school theater. I have lots of freedom to interpret this role the way I want to. The comedic moments make this story and Dolly’s right in the middle of it.”

Her favorite song is “Hello, Dolly” because “It’s the most fun I’ve had in a musical number. And I get to dance with the entire cast of boys—who are fawning all over her.” Calling the show “family-friendly and uplifting,” Nicopoulos said, “It’s happy-go-lucky and romantic, so people will be excited about it. They’ll cheer on the characters as they go through all their obstacles.”

Portraying Vandergelder is sophomore Doug Klain. “He’s a classic misogynist,” said Klain. “He runs a hay-and-feed store and is comfortable with his life. He’s a widower and a lonely guy, but doesn’t necessarily realize it and is adamantly against being with Dolly. So it’s fun playing with that dynamic and being a mean guy. I’m humbled to have a lead as a sophomore and I’m excited to do it.”

Klain likes “It Takes a Woman,” the song he sings with the ensemble. It epitomizes his misogyny about how women are subservient and bring men all the good things in life. It’s funny and explains his character.”

He said the audience will enjoy seeing “all the different ways Dolly messes with everybody’s lives and then makes it all better. It’s a show they’ll walk away from with big smiles on their faces.”

Senior Margaret Murphy plays Minnie Fay, the assistant at the hat shop. “She’s 17 and lots of fun; she’s also innocent and hasn’t seen the world or experienced love,” said Murphy. “Then she and Irene (Deanna Payne), the shop owner, meet Barnaby and Cornelius, Vandergelder’s clerks, and they have an adventure together.”

“I love the way Minnie’s mind works,” continued Murphy. “She sometimes thinks in non sequiturs, but she’s really lovable, and I’m enjoying playing a light and airy role. My favorite song is ‘Motherhood March’ with the two couples and Dolly and Horace. We’re trying to divert Horace’s attention so he won’t realize Cornelius and Barnaby are in New York.”

She said the show’s a classic the audience will be familiar with and able to relate to. And, she added, “It’s fresh and happy and they’ll be rooting for the characters to find love in the end.”

PLAYING Vandergelder’s niece Ermengarde is junior Amanda Harvey. “She’s desperately in love with an artist her uncle doesn’t approve of,” said Harvey. “She’s also exceedingly weepy and emotional and cries all the time. It’s hard to wail and dance at the same time, but it’s fun because she’s so ‘out there.’”

Harvey likes the song, “Put on Your Sunday Clothes,” because “it’s the one time my character gets to be free with her boyfriend, without her uncle around.” Overall, she said the audience will like the show’s catchy, upbeat music and endearing characters.

“We have a whole range, from the crotchety miser to the bubbly shop girl, an overly emotional teenager and sheltered men finally taking a stand to have lives of their own,” said Harvey. “And everything’s pulled together by Dolly in a pretty, humorous and melodic package.”