As a relationship-builder, he plans to be visible to students and staff. 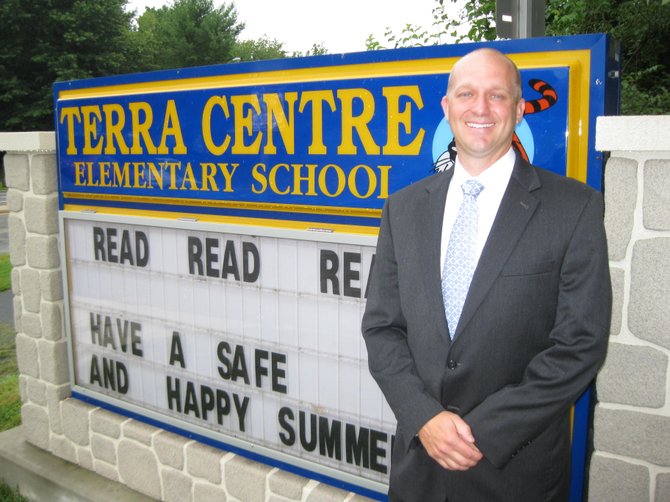 After 17 years in education, Greg Brotemarkle, 40, was named the new principal of Terra Centre Elementary in Burke on July 1. 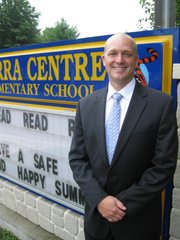 Greg Brotemarkle is the new principal of Terra Centre Elementary School in Burke.

“Being here at Terra Centre is a dream come true in a sense because I have the opportunity to serve the community that I’ve always considered my hometown,” said the former health and P.E. teacher.

Born in Philadelphia, he grew up in Burke and graduated from Lake Braddock Secondary where he later returned as a health and P.E. teacher. His P.E. background taught him to be flexible and work collaboratively with his entire staff, he said.

“My primary goal is to establish strong relationships with both the staff and the community,” he said. “And that means establishing open communication and really taking the time to learn from the Terra Centre staff.”

“He’s a very collaborative leader and he’s a great listener. He always seeks input from staff and parents when he makes decisions.” -Dr. Mahri Aste, Ph.D., principal of Mosby Woods

The school’s demographics are: 19 percent Hispanic, 59 percent white, 8 percent Asian, 5 percent black, and 5 percent other. About 90 percent of the students are in the general education program; 21 percent require special ed services, and 13 percent are on free or reduced lunches. It offers FLES, foreign language instruction where every student in grades first through sixth takes Spanish for one hour per week. There’s also a preschool program for ages 2-5.

BUILT IN 1980, Terra Centre is in the midst of a $15.3 million renovation to its “open plan” classrooms without permanent doors or walls—a novel idea in the 1970s. It is getting a new library and renovated classrooms with some new classrooms added.

“Hopefully, it’s my job to make sure [the renovation] has minimal impact on the instructional program of the school,” said Brotemarkle.

Dr. Mahri Aste, Ph.D., principal of Mosby Woods, worked with Brotemarkle for four years when he was assistant principal. “He’s a very collaborative leader and he’s a great listener. He always seeks input from staff and parents when he makes decisions,” she said. “I think he’ll be a great progressive leader for Terra Centre.”

As a relationship-builder, he plans to be visible in the hallways and cafeteria, and out front in the morning greeting students as they get off the buses. “And really spending my day interacting with students and teachers,” he said.

To that end, Jill Stewart, assistant principal at Mosby Woods, added: “He’s always interested in the best interest of students, and leads forward with thinking and listening, and then responding with a quiet strength.”

Jeff Lonnett, former art teacher at Mosby Woods, added: “He is the most fair and even-tempered person I’ve ever met in my life. His words are chosen very well. He never does anything without thinking about it first.”

Brotemarkle is proud of the partnership with The Kennedy Center’s CETA program, where teachers receive instruction in arts integration. “It allows our teachers to learn through a variety of modes, and really lends itself well to 21st century skills of creativity and critical thinking,” he added.

THE SCHOOL’S DISCOVERY GARDEN has students planting and harvesting crops themselves. Last year, they grew wheat and made their own bread. “It’s an outstanding opportunity for our students to engage in hands-on learning,” he said. “It gives us the opportunity to reinforce many of the science objectives at all grade levels.”

Greg is married to wife Carrie, a reading specialist in Fairfax County schools. The couple has two sons: Joseph, 8, and Timothy, 4. They reside in Oak Hill.