Keeping the Past
Votes 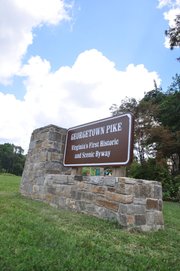 Georgetown Pike, the state’s first scenic and historic byway, was named to the Virginia Register of Historic Places, and is up for national consideration.

Local history captures the story of those who have lived before us in this our place, Great Falls. A birds-eye view spanning centuries of just a few local people and projects humbles, inspires, and calls us to action.

GEORGE WASHINGTON'S (1732-1799) endeavor to make the Potomac River navigable—George Washington, mentored by William Gunnell who lived here in Great Falls, surveyed the area along the Potomac River when he was just 16 years old, at Gunnell’s request. What he saw shaped his vision of the potential of the river, which stayed with him for the rest of his life. A successful general in the American Revolutionary War, A Founding Father, the first president of the United States (1789-1797), he is less well-known for the land he owned in Great Falls as a potential mill seat—the land where the Colvin Run Mill sits today, or for his formation of The Patowmack Company in May 17, 1785, drawing directors and subscribers from both Virginia and Maryland, to build the Patowmack Canal, a system of canals and locks to make the Potomac River navigable. Ruins of the canal locks and Matildaville, a small village built up along the river to house the construction team, still stands today. “From 1788 to 1830 more than $10 million worth of products and produce came through the Patowmack Canal system, but the company steadily lost money.” (Source: http://www.candocanal.org/articles/washington.html.) 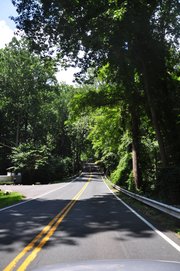 Georgetown Pike, which was named Virginia’s first Scenic and Historic Byway, was named to the state’s Register of Historic Places in 2012.

Jack and Ethel Durham, (owners and restorers of the Towlston Grange (1759), purchased in 1930), promoted the creation of the Great Falls National Park, and advocated for the restoration of the Patowmack Canal and preservation of the C&O Canal right-of-way as a national park, culminating in The Patowmack Canal Historic District being declared a National Historic Landmark in 1982, the National Park Service’s highest honor. Thanks to their preservation instincts, we can marvel at George Washington’s engineering mind today.

The Great Falls Historical Society was organized in 1977 to promote community spirit by bringing the past into the present. GFHS does this through: monthly programs on local history and people, preservation efforts, publication of historical essays, collection of artifacts and photographs, oral history interviews, genealogical research and tours and dinners at historic sites. Our website is http://www.gfhs.org">www.gfhs.org.

THE GEORGETOWN & LEESBURG Turnpike Co., and Falls Bridge Turnpike Co.’s Georgetown Pike (1813 to 1827) to connect suppliers with markets—From 1813 to 1827, crews constructed the engineered roadbed of the Georgetown Pike, not for motorized vehicles, which would take until 1910 to reach Great Falls, but for horseback riders and horse-drawn carriages. No one could have imagined that hundreds of troops would be making their way along the road in the not too distant Civil War to forage for food for men and livestock and participate in the Battle of Dranesville at Georgetown Pike near Seneca Road. As the expansive dairy farms lined the road in the early 20th century just as the first motor vehicle was arriving, who would imagine that cow pastures would give way to the most affluent community in the U.S.—according to Money Magazine, August 2011?

In 1995, the Georgetown Pike was nominated, and then determined to be eligible to be listed on the National Register of Historic Places. Thanks to the fine work of Tanya Beauchamp, sponsored by Great Falls Heritage and others, and advocated by John Adams, Betty Cooke, Karen Washburn and others over many years, the nomination was completed, submitted, and successfully listed last August 2012, 199 years later. Thanks to their preservation initiatives, what was once conceived as a way to bring more commerce through our area, will serve to bring us back in time as we appreciate the results of state-of-the-art road engineering performed 200 years ago upon a rural two-lane road.

ADDISON MILLARD (1843-1898) & family’s 51-year operation of the Colvin Run Mill (1883-1934)—The Colvin Run Mill, situated on land previously owned by George Washington, was a state-of-the-art water-powered gristmill built circa 1811. Deemed a nationally significant example of automated technologies, the mill was listed on the National Register of Historic Places in 1975. It was not until 1883—three owners later—however, that an experienced miller, rather than investors, owned the mill—which made all the difference. When Addison Millard moved from Maryland to the mill with his wife and 20 children in 1883, the local community finally began to thrive.

During the glory days at the turn of the 20th century, the Colvin Run community had a post office that established Colvin Run as a town, its own school, a doctor and hospital, surrounding black smiths and millwrights, etc. Based on research by the Great Falls Historical Society’s 2012 summer interns, the Virginia Department of Historic Resources has deemed that a Colvin Run Historic District is still eligible to be listed on the National Register of Historic Places—Tanya Beauchamp had submitted an earlier application in 2005. The final nomination, which is in progress, shows the rise of a vibrant small-village community and the demising impact of the industrial revolution on the community during the period of significance from 1883 to 1943. It is a tale of a community’s economic platform, community institutions, daily life and local culture over approximately 60 years.

MARK TURNER'S (1889-1959) dairy farming and local leadership. After the Civil War ended, the Northern Virginia area was in despair. Over the next 20 years, dairy farming emerged as the next great economic hope. Great Falls, being close to Georgetown, built a highly successful local dairy industry over the next several decades. By 1920, however, dairy prices became depressed. Residents of Great Falls, then know as Forestville, decided to support each other rather than go it alone. A group of local dairy farmers and tradesmen decided to join the national Grange movement. Members raised funds for community projects through local fundraising, including an annual Forestville Day. From 1920 through 1929, members of the Great Falls Grange raised funds for a Grange building, which was opened in 1929 and became a thriving center of the community until the mid-1970s when dairy farms began to close.

Mark Turner—son of John Turner (1808 to 1892) who purchased the farm in 1869 and built the existing farmhouse in 1892—purchased 163 acres from his grandfather in 1920. Mark played a vital role in the Great Falls community, serving as the first master of Great Falls Grange #738 and first master of Fairfax Pomona Grange #1. He was elected master of the Virginia State Grange in 1936 where he served for two terms, and then served on its executive board. The governor appointed Mark to the Virginia Milk Commission, where he served with two other members for 18 years, regulating the state’s milk industry. He served on the Fairfax County School Board, and the Fairfax County Board of Supervisors for four years. In 1934, he became vice president of the Citizens National Bank of Herndon and its president in 1936. He was also chairman of the Agricultural Stabilization and Conservation Commission of Fairfax County.

The 52-acre Turner Farm was purchased in a public/private partnership with 50 percent of the land cost being provided by the Great Falls community as a result of fund-raising. Fairfax County recently purchased the remaining 5 acres on which the farmhouse and other dairy farming structures are located. The community is in search of a resident curator who will commit to restoring the historic Queen Anne-style Victorian farmhouse to its original condition while proposing a functional reuse for the historic structure. A conceptual plan to use three acres of open land—not where the house is—for an art center has been proposed. One hundred and twenty-one years after the farmhouse was built, we are wondering who our curator will be and what functional reuse makes sense for some or all of the 5-acre property. Creating a vibrant community requires participation, dialogue, affection, imagination and a willingness to act and contribute.