The Vienna Volunteer Fire Department (VVFD) and its Auxiliary celebrated its members at their Volunteer Appreciation and Awards Banquet on Saturday, Feb. 9. The VVFD is currently in their 110th year of service and awarded several deserving members for the year 2012. 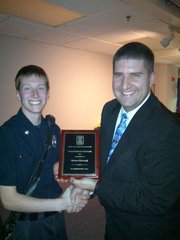 Firefighter Holly Harrison won Firefighter of the Year. EMT Michael Medwedeff was the recipient of both EMS Provider of the Year and Volunteer of the Year. Jean Schafer received the President's Award for her service as hall rental coordinator. Chief John Morrison awarded Monica Haley, Christopher Cikra, and Corey Merdler the Chief's Award for their work in designing the brand new fire engine scheduled to be placed into service this March.

Other recipients included Technician Eric Bartholomew of the Fairfax County Fire and Rescue Department who got the Robert Hunter Award for his continuing commitment to embracing the Career/Volunteer partnership. The Kate Johnson Award, which is given to a member of the VVFD and a member of the Auxiliary for selfless service, was awarded to Anthony Stancampiano (VVFD) for coordinating the first Annual Taste of Vienna, and to Vera Lloyd (Auxiliary) for sustained outstanding service. Dagny Shiells won both the Auxiliary's Volunteer of the Year Award and the President's (Vera Lloyd) Award.

The Leon Freeman Award, which is named after the Vienna Volunteer Fire Department's founder, and is awarded to a Life Member who exhibits continued professionalism and dedication, was awarded to Howard Springsteen. Between the VVFD and its Auxiliary, members volunteered over 27,600 hours in 2012 alone. The VVFD relies on volunteers from the community. For information on becoming a volunteer, visit vvfd.org.