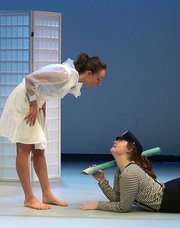 Dancers from Jane Franklin Dance have a series of performances coming up, including "Penelope's Pesky Pen," based on the book by Frank Dormer, which will be performed Jan. 27 at the Athenaeum in Alexandria and Feb. 2 at the Theater on the Run in Arlington.

Arlington — Jane Franklin likes to keep busy and to keep her company moving.

During the next few weeks, the Arlington-based dance company is performing a number of pieces, each of which depend in movement and music to tell stories.

"I try to keep the repertoire active so the dances can be performed many times," Franklin said.

The company is slightly nomadic when it comes to performance spaces — a partnership with Arlington County helps provide rehearsal space on South Four Mile Run, but most performances are done elsewhere, including Alexandria and Washington, D.C.

"We're all out in the community. We don't rent or own our own building," Franklin said, adding that she also teaches classes and leads after school programs a few times each week. "We try to have a pretty full schedule with performances for children, our 40+ program and shows for the general public."

Two of the upcoming shows are based on children's books. "Penelope's Pesky Pen," based on "The Obstinate Pen" by Frank Dormer, is the story of a girl who receives the gift of a pen with its own ideas about creativity. "The Big Meow" is about a little kitten with an unusually loud meow, based on the book of the same name by Elizabeth Spires.

For those dance aficionados who might be interested in something a little more cerebral, the company is presenting "From One Place to Another," a series of movements that involve an interactive kinetic sculpture, and some pieces will include live music performed by Mark Sylvester. Some of these pieces have been performed in public spaces in the past few years, Franklin said.

The dancers have to balance themselves on the sculpture, created specifically by Franklin and her company, which also presents the audience with the challenge of watching not just the movement of the people on stage, but the moving metal structure, she said.

"I'm challenging myself to find something new with movement and not just the movement itself," Franklin said. "I'm always trying to find a concept that I can hook on to as a reason for the dance."

SHE'S ALSO PREPARING to introduce a new piece, "Fire and Ice," which features wooden branches that have been smoothed and painted in white to represent branches covered in snow, and dancers incorporating rustling garbage bags shaped into dresses to mimic the sound of fire. 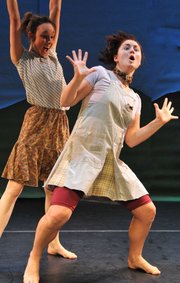 Performers from Jane Franklin Dance will be presenting "The Big Meow," based on the story, by Elizabeth Spires, of a little cat taunted by bigger cats because his meow is too loud. The performance is scheduled for Feb. 5 at the Theater on the Run in Arlington.

The dances that aren't immediately based on books or formal stories still try to express emotion or take the audience on a journey, Franklin said.

But the ones that are based on books, the performances that are mostly geared toward children, are just as bright and colorful and lively, she said. In "Penelope's Pesky Pen," for example, the sets are mostly white and colorless, which makes the bright blue pen all the more vivid.

"The whole thing is in black and white, the sets and the costumes except for the last section, where people free themselves to express themselves through drawing," she said.