Many brave crowds to witness history. 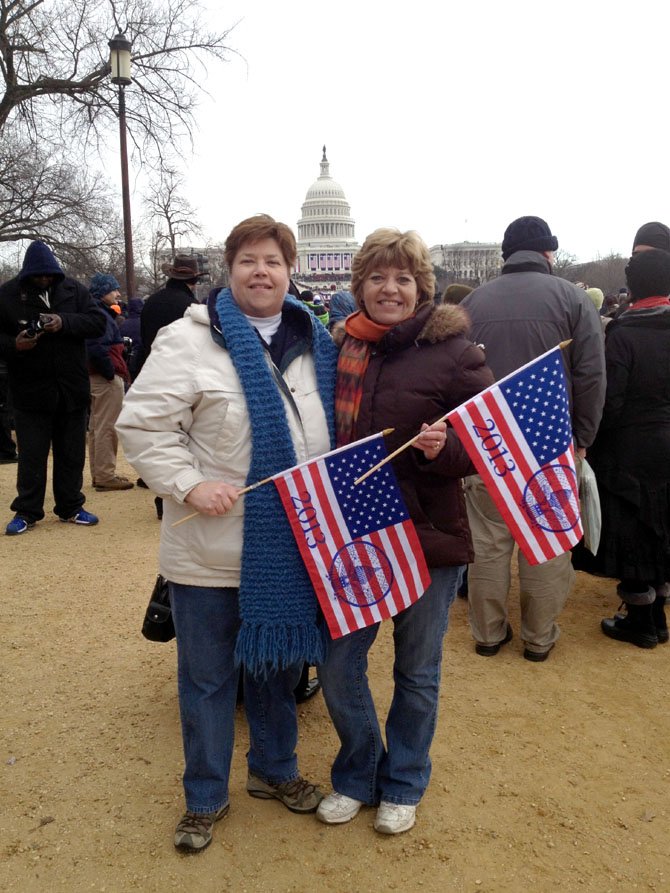 Local residents were among the hundreds of thousands who left their homes on a cold winter holiday, Jan. 21, to brave packed Metro trains and slow-moving security check points for a chance to celebrate and witness President Barack Obama’s second inauguration.

Standing among a sea of waving American flags that stretched beyond the Washington Monument, area residents say their reasons for wanting to attend the second swearing-in ceremony ranged from pride to curiosity. Their emotions ranged from joy to frustration.

Potomac, Md., resident Marjorie Goldman attended President Obama’s first inauguration and was proud to witness his second. “This time a lot of people brought their young kids. It was a lot of fun,” said Goldman, who is on the Montgomery County Democratic Central Committee. “The crowd was large, but you a shared common purpose.

Goldman, who volunteered for the inaugural committee’s transportation team as driver, attended with her husband Mitchell Stabbe and daughters Meredith, 17, and Dylan, 19. “I think Barack Obama is a terrific president and I was so glad to be there today,” she said. “I thought his speech was measured and inspirational and gave an indication of where he’s going.”

Marcia Chamblin says she left her home and arrived at the Vienna, Va., Metro station at 5:30 a.m. to avoid crowded trains. “I am a huge Obama supporter,” she said. “President Obama’s speech was very inspirational and inclusive for all Americans. I am so proud to be an American and witness this historical day.”

Some people came hoping to hear the president’s plans on specific issues. “I was very interested in what he had to say about immigration reform,” said Arnon Alom , a Fairfax engineer who immigrated to the United States from Bangladesh.

Others came out of a sense of pride and responsibility. “It is an historic event and is part of my civic duty,” said Girl Scout leader Genea Luck of Alexandria. “I have to set a good example [for the] girls and practice what I preach.”

Arlington resident Angela Harris, who is African American, says she came so her 5-year-old twin daughters could witness history. “I am happy that my children have two girls in the White House who look like them,” she said. “I thought it was important for them to see that there really is no limit to what you can achieve in this country.”

The warmer temperatures and smaller crowd made the president’s second swearing in more pleasurable than the first for some.

“During the last inauguration it was so cold and there were so many people that you could barely move,” said Marley Harmon of McLean. “It was not nearly as cold this time around and we actually had elbow room, so it was more comfortable.”

For some, the second swearing in ceremony was also more important that the first. “It is still historic this time, but reality has set in,” said Jackie Jackson of Reston. “The fact that he was elected for a second term means that he is more than just a fad riding a wave of enthusiasm. It means that he is a smart, solid president.”

Others pointed to a few glitches in the ceremony: Kelley Green of Centreville, said her inauguration experience was marred by an anti-abortion protester who climbed a tree near the Capitol and shouted anti-Democratic messages throughout most of the service.

“It was disrespectful and disruptive, and distracted from the speech and the singing,” said Green. “He yelled the whole time. I wondered why the police wouldn’t just Taser him, but I guess he has a right to free speech.”

The doyenne of household hints and former Arlington resident Heloise, who was in town for the Home and Remodeling Show in Chantilly, was also in the crowd. “[His speech] wasn’t Earth-shattering, but it is appropriate and what you’d expect to hear,” she said.