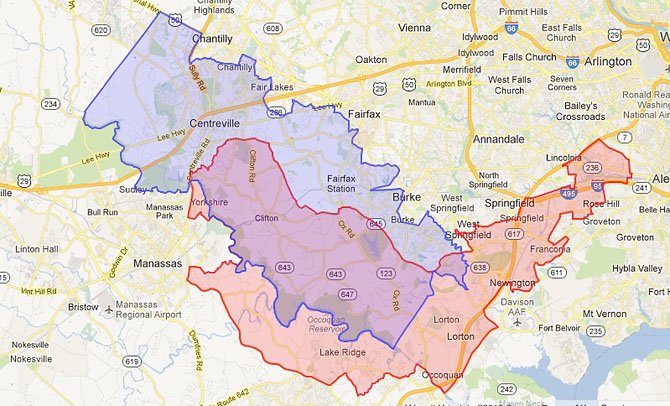 Four Northern Virginia state Senators are targets of a Republican-led effort to draw new districts — Sen. George Barker (D-39), Sen. Dave Marsden (D-37), Sen. Toddy Puller (D-36) and Sen. Chap Petersen (D-34). Democrats say the redistricting effort is a cynical attempt to take advantage of the absence of Sen. Henry Marsh (D-16), a prominent civil rights veteran, who was in Washington, D.C. for the inauguration on Monday. But state Sen. John Watkins (R-10) of Powhatan defended the effort as a way to create a sixth majority black Senate district in Southside. It passed the Senate on a 20-to-19 vote.

“This is about political power,” said Barker, who was in one of the most competitive races of 2011. “They are trying to target the Democratic senators who represent districts that are basically swing districts.”

The drama took place Monday afternoon, when the state Senate took up a bill that would have made small changes to four Senate districts. During the debate, Republicans amended the bill in a way that would radically change districts throughout Virginia. Barker’s seat and Marsden’s seat, for example, would be about 80 percent different. And Puller’s seat would swap about 70 percent of her current precincts for new ones. Petersen, who represents sections of Fairfax City, Vienna, Dunn-Loring and Centreville, said in a call Tuesday he stands to lose nearly half of his constituents if the politically redrawn map holds up to legal challenges. He said he would lose precincts that he’s held for 12 years, including Mantua, Mosby Woods, Fairfax Villa and some newer precincts in Centreville.

“This is outrageous, and it must be stopped,” said Del. Charniele Herring (D-46), chairwoman of the Democratic Party of Virginia. “This goes beyond partisanship. It’s downright undemocratic.”

REDISTRICTING USUALLY takes place once a decade, a process that’s tied to the decennial census. Lawmakers have deviated from that once-in-a-decade timetable from time to time, usually to address problems with split districts that have presented problems for registrars. The effort that passed the Senate this week, however, goes far beyond that kind of tweaking by dramatically redrawing the map for the entire commonwealth. On the Senate floor, Watkins said failing to create a sixth majority black district in Southside Virginia would invite lawsuits under the 1965 Voting Rights Act.

“I wish to avoid litigation,” Watkins said during the floor debate Monday afternoon.

Democrats countered that a court fight is imminent.

“We will fight this all the way to the Supreme Court of Virginia if necessary,” said Senate Democratic Leader Dick Saslaw (D-35) in a written statement. “First voter suppression efforts, then the war on women, and now draconian changes to a Justice Department-approved redistricting plan. It appears that there are no boundaries to their overreaching political agenda.”

THE TIMING of the effort was galling to many Democrats, who accused the Republicans of taking advantage of the presidential inauguration to score political points. Because the state Senate is evenly divided between 20 Democrats and 20 Republicans, any change in the balance of power could create an imbalance. Although the Republicans have delayed the bill on several previous occasions, they waited until Monday to move on the legislation.

“To plot to do this on Martin Luther King Day, when civil rights icon Sen. Henry Marsh, left to attend the historic inauguration of our president is truly embarrassing,” said Marsden. “I am deeply disappointed that the Republicans continue to play these petty partisan games.”

Republicans pointed to a 2011 newspaper column by former Democratic Gov. Doug Wilder, the nation’s first elected black governor, supporting a Senate redistricting plan passed when Democrats ruled the Senate. Democrats countered by accusing Republicans of “packing” the districts by using the change in Southside Virginia to free up more districts that would be friendly to Republicans.

“Obviously we went through redistricting in 2011. The constitution specifically speaks to 2011 as being the redistricting year, not 2012, not 2013,” Petersen said. “You can’t say ‘Obama was elected in 2012, but now we don’t like him in 2013, so we’ll just have another election in a year’ when the constitution doesn’t authorize elections … That’s absurd.”

Petersen said he is confident any judge would find the bill unconstitutional, but one question still out there is whether Attorney General Ken Cuccinelli, a Republican who is running for Governor in 2013, will defend the tactic.

“This is what happens when Republicans regulate other Republicans,” Petersen said. “Every layer of oversight is stacked against us.”

“I don't know if it's legal, but I do know it is despicable,” said Fairfax County Supervisor Jeff McKay (D-Lee), who said he was in bed with the flu when he got word about the political power-play.

“To pull a purely political maneuver on Martin Luther King Day and Inauguration Day — days that promote unity — is not only wrong, it’s purely unpatriotic. I only hope this can be reversed and that the General Assembly will actually focus on the peoples work and quit playing games.”