Celebrating the Fourth At Chantilly Mosque

Celebrating the 4th at Chantilly Mosque 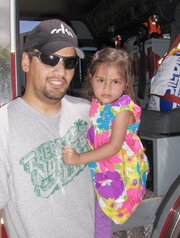 Centreville — There were hot dogs, hamburgers, watermelons, children’s games, politicians and speeches — a typical, American celebration of the Fourth of July. But this one last Thursday was at the Mubarak Mosque in Chantilly, home of the local Ahmadiyya Muslim Community.

It was also special because it was the first Fourth of July celebration held there since the mosque opened last summer. Fouzan Pal, general secretary of the Northern Virginia Chapter of the Ahmadiyya Muslim Community, said it was part of the nationwide Muslims for Loyalty campaign.

“It represents our commitment to the country we live in and all the security and freedoms that we enjoy here,” he said. “I came to the U.S. in 1987 on religious asylum, and it was a great blessing to be able to practice our faith here. We couldn’t do that in Pakistan — we were persecuted there.”

Just off Walney Road, the two-story, 7,200-square-foot place of worship is called the Mubarak Mosque which, in Islamic, means “blessed tidings.” And the Ahmadiyya Muslims are a sect of Islam whose central tenet is “Love for all, hatred for none.” It condemns violence, terrorism and Jihad and, instead, believes in morality, justice and peace.

There are 70 chapters of Ahmadiyya Muslims in the U.S., including five in Virginia. About 4,000 members live in the Washington Metropolitan area. Two chapters share this center in the Walney Oaks community — the Northern Virginia Chapter, whose members live in Sterling, Leesburg and Ashburn; and the Central Virginia Chapter, comprised of Centreville, Chantilly, Fairfax, Gainesville and Haymarket residents.

The majority of the attendees come from Centreville, Chantilly and Fairfax. A.J. Amjad, secretary of the Central Virginia Chapter, said his chapter and the Northern Virginia Chapter have about 950 members total, with 400 coming to the mosque on Fridays.

Rust, who led the flag-raising, said, “I’m glad to see the mosque is thriving and growing. Thank you for inviting me to this celebration of our nation’s birthday.” And Obenshain said it’s “incumbent upon us to make sure the American dream survives for everybody.”

Foltz identified himself as the founding pastor of Wellspring United Church of Christ, a political candidate running against incumbent Del. Tim Hugo (R-40) and a representative of the Centreville Labor Resource Center. He told attendees the CLRC is a great place to hire workmen and is “an example of what the community can do when it comes together to solve its own needs.”

Furthermore, said Foltz, “On this Fourth of July, we have to honor the heroes that have made this country great and also think about the 10 fallen firefighters from Arizona and all the firefighters who work hard to keep us safe.”

Also addressing the crowd was Naseem Mahdi, national vice president of the Ahmadiyya Muslim Community. “We strongly condemn terrorism of any sort, as well as violence in the name of religion,” he said. “Since the 10th anniversary of 9/11, we started holding blood drives. In the last two years, we collected 25,000 bottles of blood — and each bottle saves three lives.”

This year’s blood drive will run from Aug. 11-Oct. 11. “It’s a nationwide blood drive under the name, Muslims for Life,” said Mahdi. “May God bless you all and happy Independence Day. We will now have a short prayer for our homeland, the United States of America.”