A Bluesy Good Time on the Pike Jumphead
Votes

A Bluesy Good Time on the Pike Jumphead 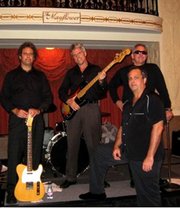 BG and the Mojo Hands, led by Brian Gross, will kick off this year's Columbia Pike Blues Festival on June 15.

Arlington — The summer may have unofficially started on Memorial Day, but another annual summer celebration is just around the corner — the Columbia Pike Blues Festival.

The festival has been a staple of Columbia Pike in the summer for nearly 20 years, since it began as a smaller concert in the parking lot of Patrick Henry Elementary School, said Amy McWilliams, marketing coordinator for the Columbia Pike Revitalization Organization.

"It's become a real institution," something families can do together on a warm afternoon, where parents can enjoy a day out while their children dance to great music, she said. "We have people who begin putting folding chairs out the night before" to ensure a good seat for the concerts.

More than 7,000 people are anticipated to attend this year's concert, which features four local blues bands and culminates with a performance from G.E. Smith, former bandleader for Saturday Night Live. Later this summer, Smith will be on tour with Roger Waters from Pink Floyd, McWilliams said.

Of course, there will be food vendors, including Big Daddy Barbecue, some Latin American food, kebabs and other tasty treats, and beverages ranging from kid-friendly to those just for adults.

There will be additional safety precautions in place this year, McWilliams said. People are asked not to bring backpacks, a change from years past that has been adopted as an abundance of caution following the bombings in Boston this past April.

THE REAL DRAW, of course, is the music.

First to take the stage this year will be Brian Gross and his band, BG and the Mojo Hands.

The band includes Gross on guitar and vocals, Roger Edsall on harmonica, guitar and vocals, Bob Malardi on bass and vocals and Chip Clemmer on drums. They have a Chicago-style blues foundation, with a little West Coast swing and just a touch of rockabilly, and this will mark the band's second appearance at the festival, said Gross, a Falls Church resident.

Gross is no stranger to the area music scene, hitting area stages in 1993, putting his first band together a year later, playing open mics around the area and with the D.C. Blues Society Band. He also teaches, inspiring the next generation of rockers.

Clarence "Bluesman" Turner and his band will be second on stage during this year's Columbia Pike Blues Festival.

The Columbia Pike Blues Festival is "a great event," he said. "If you're a blues musician, playing festivals is one of the most fun things you can do." He's been a regular in attendance and is looking forward to taking the stage.

Following BG and the Mojo Hands will be Clarence "Bluesman" Turner, driving down from Maryland for the big day.

Turner, who sings and plays guitar, is joined by Sean Graves on drum, David Satterwhite on bass, Chuck Pearson on keyboard, Gary Hendrickson on trumpet and Gene Meros on the saxophone, coming together for a big, full sound that includes not only Delta blues, but a few covers, like C.C. Rider, Ray Charles and Muddy Waters.

In addition to preparing for the festival, Turner's getting ready to release his second album, which should be available by the end of June. That album, a follow up to last year's “Pay Day,” is mostly original tunes and should anchor his band's performance on June 15.

Like other bands on the bill for the festival, Turner's done some touring, mostly up and down the East Coast, but he's also headlined festivals overseas.

"We're looking to expand more globally," he said. "I've been doing most of everything myself," but with more support and more guys in the band, there's room for trying new kinds of songs.

Turner has lived in this area most of his life and has played most of the festivals in the D.C. region, but the Columbia Pike festival hasn't been among them.

"We're a very energetic band. I think people should be sure to check us out, you'll like us," he said.

The band's sound encompasses many different styles of blues and yet is inspired by all of them. He's also got a pair of songs, “Sabrina,” an instrumental, and “Hey Lady,” that he wrote for his wife of 13 years. That's where most of his inspiration comes from, and the instrumental song tends to be well received among audiences, Turner said.

Next up will be Fauquier County resident Chris Polk and his band, which features Polk on lead guitar and vocal, Scott Mattern on guitar, Cornelius Conway on bass and backing vocals, Chris Wing on drums and Brian Jackson on drums. 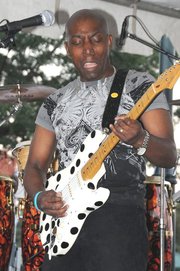 Driving up from Fauquier County, Chris Polk and his band are returning to this year's Columbia Pike Blues Festival for the second year in a row.

Polk played the festival last year and was asked to come back this year, a rare occurrence, as most bands don't get repeat performances back to back.

"I've got a musical background — my dad's a musician," Polk said. "I've been playing for more than 30 years," including some touring along the East Coast.

He considers his sound more "progressive" blues but acknowledges some Buddy Guy influence. However, that doesn't mean someone who saw his set at Madams Organ in Washington this past weekend can predict what will be played during the festival.

"Sometimes we'll play a little Rolling Stones, some ZZ Top," he said. "You just don't know. I know what I'm about, and that's M-U-S-I-C."

Polk will get a feel for the audience within the first few songs and tweak a playlist accordingly, playing more upbeat and rocking songs if the crowd's ready to dance or tone it down a little if it's a more laid-back audience, he said.

The final local act is Cathy Ponton King and her band, which features Tim Ford on keyboards, John Previti on bass, Andy Rutherford on guitar and Andy Hamburger on drums. King sings and plays guitar as well, and the band considers Flanagan's Harp and Fiddle, in Bethesda, as their "local" home stage.

The band is going through a bit of a change, as drummer Antoine Sanfuentes is leaving the area to become senior vice president of news for NBC News in New York City.

King is no stranger to the news world herself, studying journalism in college and starting a career in ABC's radio division after she graduated from the University of Maryland. Despite her love of news and journalism, King quickly realized she had to make a choice.

"I couldn't put singing and songwriting behind me," she said.

King, like some of the other musicians performing at the festival, lament the state of rock and blues music in the area, pointing to the number of talented and creative musicians who had to leave the area to make it big, like OAR, one of the members of the band Vampire Weekend and, of course, Dave Grohl.

City," she said. But that hasn't stopped her from continuing to follow her passion.

Cathy Ponton King and her band of bluesmen will be the final local act of the night at the Columbia Pike Blues Festival, before former Saturday Night Live bandleader G.E. Smith closes the event.

King has released four CDs, including one this past February, and the original songs on each are written by King and her songwriter producer husband Jeff King.

Along the way, she's met and performed with many famous friends, including Muddy Waters (who she met backstage during his 63rd birthday party, drinking champagne), Albert King, Albert Collins, Earl King, Bo Diddley, all of whom have influenced the Chicago-style blues she uses as the foundation of her sound.

The Columbia Pike Blues Festival is a great event with "a huge crowd," King said she's happy to be setting the stage for G.E. Smith.

"Having grown up watching ‘SNL,’ I'm really looking forward to seeing him play," she said. "I'm so proud of Arlington for supporting the blues. It's a great American art form."