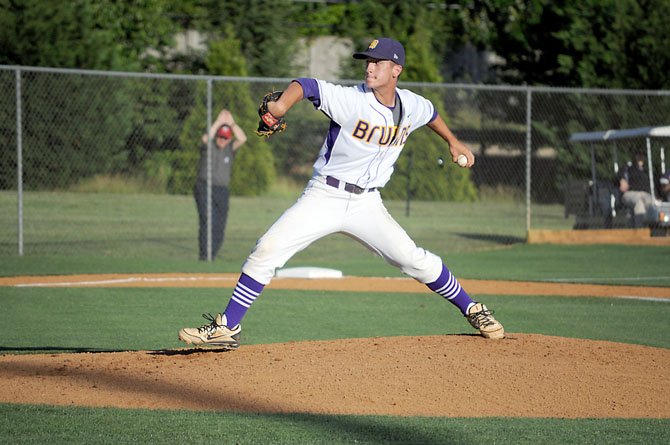 The Bruins overcame a slew of early-season ailments suffered by key players to reach this point. Rogers, a left-handed pitcher who signed with the University of North Carolina, underwent off-season Tommy John surgery and has been limited to a pitch count during each of his starts. On Tuesday, June 4, he threw a season-high 91 pitches in five-plus innings.

Gransback, on the other hand, has been one of the few Lake Braddock standouts to avoid the injury bug.

“Knock on wood,” the center fielder joked when asked about staying healthy.

Gransback didn’t have any wood on hand to fulfill his superstition. He did, however, “knock” one out of the park earlier in the evening.

Rogers earned the victory on the mound, Gransback hit a solo home run in the fifth inning and the Lake Braddock baseball team defeated Patriot 5-4 in the Virginia AAA state quarterfinals at Lake Braddock Secondary School. The defending state champion Bruins earned a return trip to the state semifinals, though their path has been bumpier this time around. Lake Braddock, the Northern Region champion, will face Eastern Region runner-up Great Bridge at 3 p.m. on Friday, June 7 at Westfield High School.

“He’s just a competitor. When he laid out his throwing program right after his surgery, originally there [were thoughts that] he’s definitely not going to throw [during the season]. … I’m glad that he came through and got healthy.”

Rogers worked into the sixth inning while throwing a season-high 91 pitches. He allowed two earned runs and four hits while walking two, hitting one batter and striking out seven in five-plus innings. The big stage is nothing new to Rogers, who threw a four-hit shutout in last season’s state championship game, but the senior is getting used to working again with a larger pitch count.

“I got back in my normal routine,” Rogers said. “… It felt right again instead of having to warm up real quick and speed myself up.”

Rogers surrendered a two-run home run to Patriot right fielder Nick Moore in the second inning. The Pioneers loaded the bases in the fifth after a two-out Lake Braddock error extended the frame, but Rogers ended the threat by inducing a groundout.

Lake Braddock shortstop Jack Owens went 2 for 4 with an RBI against Patriot on Tuesday night, June 4.

“He’s just a competitor,” Lake Braddock head coach Jody Rutherford said. “When he laid out his throwing program right after his surgery, originally there [were thoughts that] he’s definitely not going to throw [during the season].

“… I’m glad that he came through and got healthy.”

Lake Braddock led 3-2 after three innings thanks to three Patriot errors. The Bruins extended their lead to two when Gransback led off the bottom of the fifth with a solo home run to left.

Gransback, a first-team All-Met selection by the Washington Post last season, has been one of the few Bruins to remain healthy during the 2013 campaign.

Shortstop Jack Owens singled in what proved to be a valuable insurance run in the sixth inning, increasing the Lake Braddock lead to 5-2. Patriot designated hitter Zack Martin hit a two-out, two-run homer in the top of the seventh inning, pulling the Pioneers within one, but Lake Braddock held on for the win.

Senior right-hander Nick McIntyre earned a two-inning save for Lake Braddock. He recorded three outs with two pitches in the sixth inning, inducing a double-play grounder and a fly out to center.

Owens finished 2 for 4 with an RBI. Second baseman Nick Neville went 2 for 3.