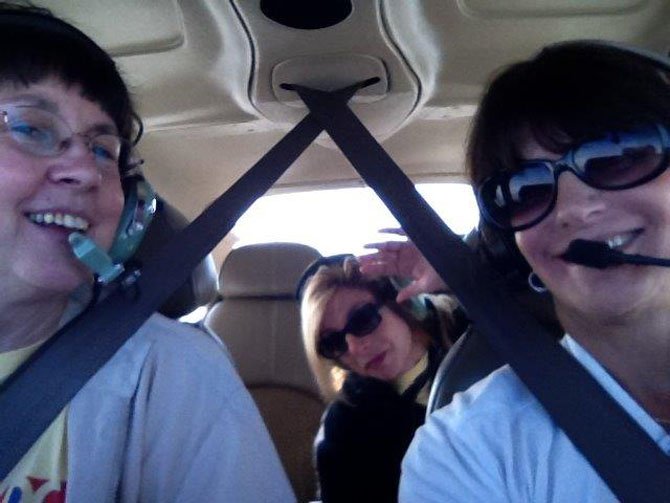 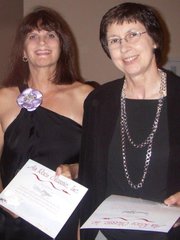 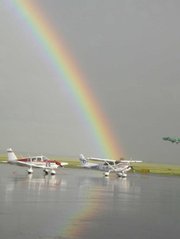 Potomac — Debi Dreyfuss has wanted to fly since she was 6 years old when her uncle took her for a ride in his Cessna 172. She remembers, “My mother told me I couldn’t learn to fly, as did my first husband — so I pushed my dream to the back-burner. After I divorced and saved some money, I signed up for lessons at Davis Airport in Laytonsville because it was the best deal around. I paid $35 per hour when I was learning to fly a single-engine Piper Cub. I loved flying — everything about it met my highest expectations. I was hooked.”

Dreyfuss, now 63, has been flying for more than 20 years and is a commercial, multi-engine instrument rated certified flight instructor who owns two airplanes — a restored 1977 Cessna 150 “Texas Taildragger” for “fun and future training,” and a 2005 Cessna 182T with a glass cockpit for “travel and fun too.” Dreyfuss has single-engine land and sea, multi-engine land, flight instructor and tailwheel credentials. She is a member of the Washington D.C. chapters of the Ninety-Nines Inc., International Organization of Women Pilots and Women in Aviation International (WIA) — and she is teaching her grandson to fly.

This June 18 through June 22, Dreyfuss and teammate Linda Knowles from Falls Church, Va., will fly in the 2013 Air Race Classic — competing against 47 all-female teams and over 100 female pilots for the championship title in her larger plane — the Cessna 182T. The annual race pits two-three person teams of pilots racing against their own best speed in the plane of their choice against other teams, many who are representing colleges and universities. The aircraft must be “stock” models (no experimental). Each plane is assigned a handicap speed — and the goal is to have the actual ground speed be as far over the handicap speed as possible. The teams are given leeway to play the elements, holding out for better weather, winds, etc. The objective is to fly the “perfect” cross-country.

The 2013 race will begin in Pasco, Wash. and span over 2,128 nautical miles, ending in Fayetteville, Ark. The women fly the plane through eight intermediate stops in four days in their quest for the fastest time. “It takes a lot of planning,” said Dreyfuss. “It’s a visual race with no instrumentation. We must be able to see outside the cockpit to control the plane’s altitude, navigate and avoid obstacles.”

Team DC3 which included Dreyfuss, Knowles and Carol Bailey first raced in the 2010 Air Race Classic. In 2011, they placed sixth out of 50 teams and in 2012, they came in 12th out of 54 teams. “We’ve graduated from three yahoos in our first race to serious contenders,” said Dreyfuss. “Women from age 18 to 80 are racing in this competition. It’s inspiring, challenging — and wonderful to have the opportunity to meet an accomplished group of women who are all so excited about flying.”

She discusses last year’s race: “On leg 7, our team was poised to take advantage of the terrific tailwind from South Dakota to Ashland to Sault Ste Marie, but teammate Carol became ill from the heat and bumps in the back seat, so we had to stop. Because of the wait, we missed the thunderstorm, got the tailwind and won the leg — all by accident.”

Women’s air racing first began in 1929 with the First Women’s Air Derby. Twenty pilots entered in that first race that went from Santa Monica, Calif. to Cleveland, Ohio. Air racing became popular in the 1920s, but women pilots were forbidden to race against the men in that era, so the women started their own. These first contestants were women who dared to be different —risk-takers who weren’t afraid to break traditional barriers to learn to fly.

And Dreyfuss is one of those risk-takers who is not only a role model for women, but also has funded training for women who want to follow their dreams of a flying career — a field where only six percent are female. Every year she funds the “Debi Dreyfuss Dare to be Different” Award for local Ninety-Nines chapters. Team DC3 has raised over $6,000 for aviation education awards. The Ninety-Nines Inc., International Organization of Women Pilots was founded by Amelia Earhart along with 99 female pilots.

Dreyfuss owned a signage business called Designs Unlimited for 20 years until 1997 when she sold it. She was in advertising sales for 10 years and retired in 2007. She and her husband, Norman live in Potomac but spend a lot of time at their vacation homes in Lake Anna, Va., and Vail, Colo. He serves as first mate on their frequent flying journeys to Florida and The Bahamas.

To learn more about the race, race teams,, status or to donation support, check out www.airraceclassic.org.