In what was perhaps the biggest turnout since its inception, Alexandria celebrated its Irish heritage March 2 and paid tribute to Vietnam Veterans in the 32nd annual St. Patrick's Day Parade.

Sponsored by The Ballyshaners, the parade was founded by Pat Troy, who officially stepped down as organizer following this year's event. Showcasing veterans, military service members and local dignitaries, the parade was led by local restaurateur and former NHL great Brian “Bugsy” Watson, who served as grand marshal.

An antique car show and dog show preceded the parade, where thousands gathered to observe a moment of silence for critically injured Alexandria Police Officer Peter Laboy as the motor unit of the APD paused in front of the reviewing stand.

Alexandria Town Crier Ben Fiorre-Walker announces “The Parade is coming,” to the overflow crowds along King Street on Saturday afternoon.

U.S. Rep. James Moran thanks Pat Troy for once again hosting with the Ballyshaner’s the Alexandria St. Patrick’s Day Parade. At the first parade in Alexandria, the congressman reminisced that he brought his stepfather, who was dying of pancreatic cancer and his dad was pleased to have seen it.

The U.S. Navy Band performs at the reviewing stand.

Armed with cameras, the crowds along King Street capture the parade.

Pat Garvey sings a song written by a veteran after a first visit to “The Wall,” the Vietnam Memorial in Washington, D.C. 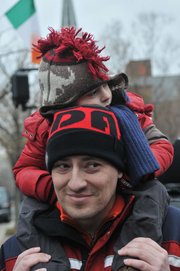 The staff of Izalia Spa gets into the celebration of the parade.

The staff of Izalia Spa gets into the celebration of the parade.