Haeringer, one of America's most respected and innovative culinary personalities, originally trained in Paris, came back to the U.S., eventually taking over the L'Auberge following in his late father Francois' footsteps. Jacques' culinary roots began when his father opened Chez Francois, an authentic Alsatian restaurant near the White House in Washington, D.C., in 1954. 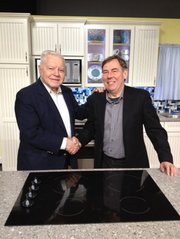 Many U.S. presidents and celebrities have dined there. When the building was sold in 1976, L'Auberge Chez Francois moved to Northern Virginia, in a setting reminiscent of the French countryside, and today remains one of the D.C. metro area's most popular French restaurants. They have won many awards for excellence.

Chef Jacques hosted a PBS series based on the book "Two for Tonight" and "Les Desserts," as well as hosting "A Bite of History" for the History Channel. He has also appeared on the "Good Morning America" and "Talk" T.V. shows. His articles and recipes have been featured in Bon Appetite, Gourmet, Wine & Spirits, Southern Living and Better Homes & Gardens, to name a few.

This premier production on Communicating Today's new "Gourmet Chef" segment can be seen on Channel 10 on Wednesday, April 10, at 8:30 p.m., Friday, April 12, at 6:30 a.m. and Sunday, April 14, at 3:30 p.m. For further information, contact the producer at www.communicatingtoday.com. To find out more about L’Auberge Chez Francois, visit www.laubergechezfrancois.com.