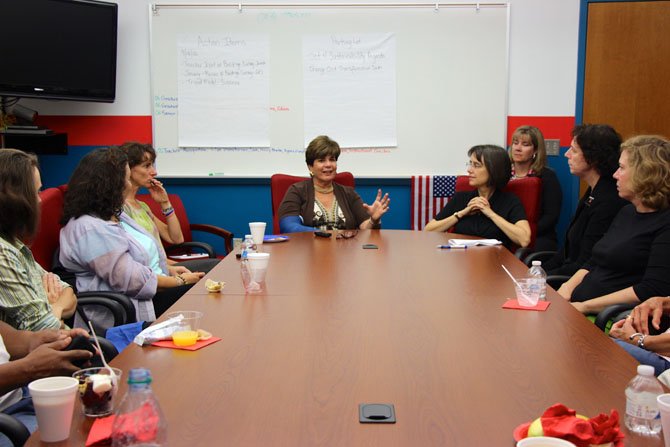 Principal Suzanne Maxey talks to parents during a principal's chat.

For two days this week, a team of federal officials from the U.S. Department of Education were in Alexandria to follow the money. At issue was $6 million received by T.C. Williams High School after it was dubbed a "persistently lowest achieving school" — an embarrassing designation that came with a large chunk of change. The officials wanted to know how the money was spent, and if the infusion of cash was successful.

"We would like to have had a little less money at the beginning and a little more money at the end," said Principal Suzanne Maxey. "When you start doing school improvement, what happens is that invariably there's a new principal and a new set of leaders. So it takes them a little time to figure out what the issues are and what the problems are."

Back in 2010, the high school was identified as a "persistently lowest achieving school." At the time, it was a new classification by created by the Obama administration to funnel more money to troubled schools with years of poor performance on standardized tests. Ever since No Child Left Behind created a constant way to track T.C. Williams, test results put Alexandria's only high school at the bottom of the pack year after year — a trend that has been difficult to turn around at a school where more than half of the student population qualifies for free or reduced-price lunch.

"I suspect the problems have been going on for much longer than that, but we started measuring the problems after No Child Left Behind," said School Board member Bill Campbell. "It's the low-income and minority kids that we've been failing, and those are the folks that have historically been discriminated against."

THE TWO-DAY AUDIT this week included a day at the school, where federal officials interviewed teachers, students and parents, as well as a day at the central administration headquarters on Beauregard Street. Aside from tracking how the money was spent, the officials also tried to get a sense of what the atmosphere is like at the high school — whether actions taken were seen as effective or ineffective.

"One of the initiatives that perhaps didn't get the bang for the buck is reducing the course load for math and English teachers," said Marianne Hetzer, president of the T.C. Williams Parent Teacher Student Association. "The students didn't have an extra planning period, so it really didn't get the teachers connected with students during the school day."

Hetzer said that most of the changes taken during transformation have been effective. She said the biggest positive change was installing Maxey in the corner office at the high school, which had seen a revolving door of administrators come and go since longtime Principal John Porter stepped down from the position in 2006. Other positive changes include increasing the number of counselors, which she said has helped focus the students in terms of course selection and college preparation. Another effective change is the institution of a period in the day called Titan Time, which can be used for remediation, studying or mentoring. Overall, she said, the $6 million of federal money was wisely spent.

"Absolutely," said Hetzer, who was one of the parents interviewed by federal officials this week. "With the combination of the money and the initiatives, we are definitely making strides."

FOR MAXEY, the first order of business for transforming the school was discipline. The school had a problem with fights in the hallway, and the environment was alarming many students and parents. The number of disorderly behavior offenses has gone down from 684 three years ago to 276, and the number of weapons offense has gone down from 14 to three.

"That's something we can show quantitatively and anecdotally," said Maxey. "Talk to anyone who goes to T.C., and they'll tell you that it's a calm school and the halls are quiet and the kids are doing the right thing."

After creating the right environment, Maxey and her team set out to use the federal money to make changes at the school. About half of the money was used for additional teachers, counselors and instructional coaches. The rest of the money was used for a variety of initiatives, all of which were approved by state officials before the money was spent. Since the designation, the school has become fully accredited and enrollment in Advanced Placement classes has increased. The graduation rate has also increased about 5 percent.

"It's important to note that although the PLA status is over, we are still working hard to create programs to make kids successful," said Pierrette Hall, lead academic principal at T.C. Williams. "So we are still transforming, if you want to use that term, in the sense that we are making sure that our kids have everything they need."