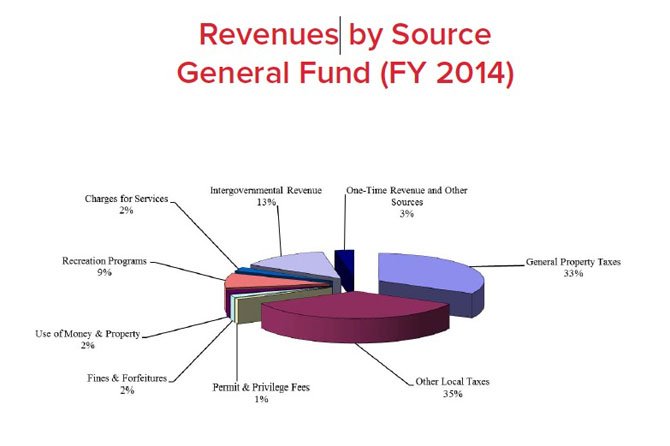 The proposed revenues for the Town of Herndon’s FY2014 budget.

All classifications and thresholds remain at the current amounts.

Sewer Lateral Repair and Replacement Program: Remains at $2 per year ($0.50 per quarter).

“We had some excellent work sessions, and excellent Q and A sessions, I think this represents a well thought out budget,” said Councilmember Grace Wolf. “We’re lucky that the town’s assets are doing relatively well compared to our neighbors and that we’re able to have good services for extremely good rates and I’m very pleased that we’re able to leave our tax rates the same. It puts us in good position in case of a future potential economic downturn or if sequestration continues.”

Councilmember Shelia Olem credited town staff with being “very good stewards of the town” by coming up with a budget that maintains rates, unlike other localities, including Fairfax County, without cutting staff or services.

THE COUNCIL had discussed lowering the real estate tax rate, currently at $0.265 per $100 of assessed real estate value, by one penny but decided any loss of services would not be worth the lower tax rate.

“We have not had a single person come forward and ask us to lower the tax rate, at least on the record,” Merkel said. “I would love to lower the tax rate as much as anybody, but I don‘t think this is the right time, I’d like to do it when it might actually have a big impact for residents. I don’t think anyone would be jumping for joy if we lowered the tax rate, cut services and saved them [as calculated by town staff] an average of $2.66 a month.”

Town Manager Art Anselene said several revenue sources emerged during the budget planning process that were not in the early drafts, including an additional $77,000 from Fairfax County to offset stormwater management operating and maintenance costs.

He also said the town’s business, professional and occupational license (BPOL) tax income, which was collected March 1, proved to be an increase over last year, which was unexpected given the sequestration cutbacks.

“After this spring’s collection, we’ve seen BPOL fees increase by 10 percent over last year’s collection, which represents a 30 percent increase of what we were anticipating budgeting for the upcoming fiscal year,” Anselene said. “With new businesses relocating into the town, we feel more confident in saying the BPOL fees can be increased by $230,000 to meet additional objectives of the council within the budget.”

He said one of the objectives was for a “pay for performance” system for town employees, which would reward employees for exemplary service, also in keeping with the town’s “Count On Us” customer service initiative.

“We have gone back and looked at overall compensation throughout the public sector in Northern Virginia, and looking back over the last five years the town is right at the bottom of the list in terms of compensation increase provided to employees,” Anselene said. “Increases range from a 20 percent to 200 percent increase above what we’ve been able to do. The increased revenue we think provides an opportunity for the council to commend the excellent work from the town employees.”

THE PAY FOR PERFORMANCE system would involve an employee evaluation on the anniversary of their hire date, and high evaluations would lead to a raise.

Councilmember Melissa Jonas said that was a major plus in this year’s budget.

“I feel pretty good about having that nest egg so we can do something for our staff,” she said.

The full budget will be posted online at www.herndon-va.gov by June 30.