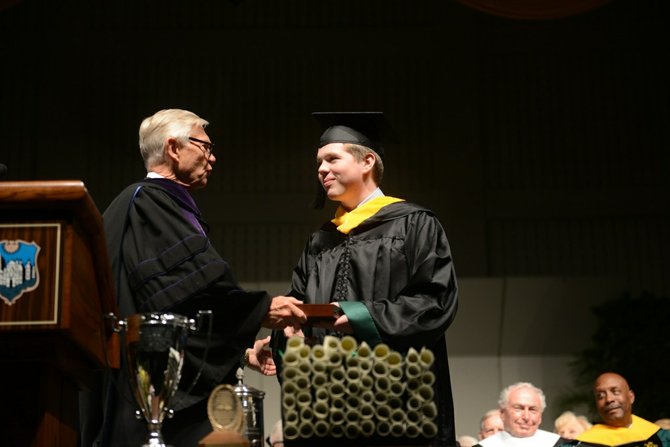 Brian Anthony Rabe, of Springfield, graduated from the College of William & Mary on Sunday, May 12, with a Bachelor's in both biology and chemistry, membership in Phi Beta Kappa and an overall 4.0 GPA. According to the citation announcing his recognition, he maintained a perfect GPA despite an incredibly demanding course load, including honors chemistry and honors biology.

Indicative of his impressive scholarship, he recently received a prestigious National Science Foundation Graduate Fellowship, which is rarely awarded before a student enters a doctoral program.

To honor his skill and work ethic, Rabe was presented the Lord Botetourt Medal.

The Lord Botetourt Medal was established in 1772 “for the honor and encouragement of literary merit.” In contemporary times, it has been given to the graduating senior who has attained the greatest distinction in scholarship.

Described as a “once-in-a-career” student by one nominating faculty member, Rabe demonstrated remarkable intellectual grasp and an ability to quickly master complex aspects of research. He ranks as the strongest overall student — academically and otherwise — wrote one of Rabe’s faculty nominators, who noted that there had been no other student like Rabe in the professor's 40-plus years at William & Mary.

In the spring of his freshman year, Rabe joined the Howard Hughes Medical Institute Freshman Research Program in the biology department. By the end of the semester, he was making major contributions to a project on characterizing the pattern of neurotransmitter receptors in the developing vertebrate brain. Rabe has presented research at several national and regional meetings, including the Society for Developmental Biology’s annual meeting, where he won an award for the best undergraduate poster. He also has co-authored a number of papers published in peer-reviewed journals.

During the course of his William & Mary career, Rabe garnered several academic accolades. He was the 2013 recipient of the Thomas Jefferson Prize in Natural Philosophy. In 2012, he was named one of William & Mary’s three Goldwater Scholars, as well as one of the university’s two Beckman Scholars. Despite carrying a full load of academic classes, Rabe dedicated as much time to his lab work as most doctoral students with research assistantships, according to one of his professors.

Rabe’s kindness and willingness to mentor other students also left a positive mark at William & Mary.

Rabe was involved in a variety of extracurricular and volunteer activities, in addition to serving as an exemplary undergraduate teaching assistant and a resident assistant.