A Floris fifth-grader honored for excellence in math.

A Floris Elementary School fifth-grader has been selected as the Virginia recipient of the Nicholas Green Distinguished Student Award by the National Association of Gifted Children. Neeyanth Kopparapu was selected for demonstrating excellence in the field of math and will receive the award at a ceremony in October. 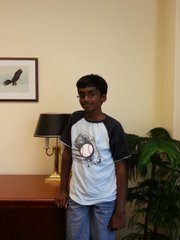 Neeyanth Kopparapu was selected for demonstrating excellence in the field of math.

To be considered, students were asked to write a couple of paragraphs about their passion and submit their work in December. For Neeyanth it was easy, he had always excelled in math, and even participates in competitions outside of school.

He finally heard in March that he would be honored with the award, and later received a letter of congratulations from the superintendent of Fairfax County Public Schools, Dr. Jack Dale.

Avery Ginn, Neeyanth’s fifth-grade teacher, speaks very highly of her star student. “He’s very passionate about math and science, very inquisitive. And he’s always willing to offer new information,” she says. She also added that Neeyanth does a lot of independent research outside of school.

The Nicholas Green Distinguished Student Award was established in memory of Nicholas Green of California, who was killed in a drive-by shooting while visiting Italy in 1994.