For Whom The [School] Bell Tolls
Votes

For Whom The [School] Bell Tolls 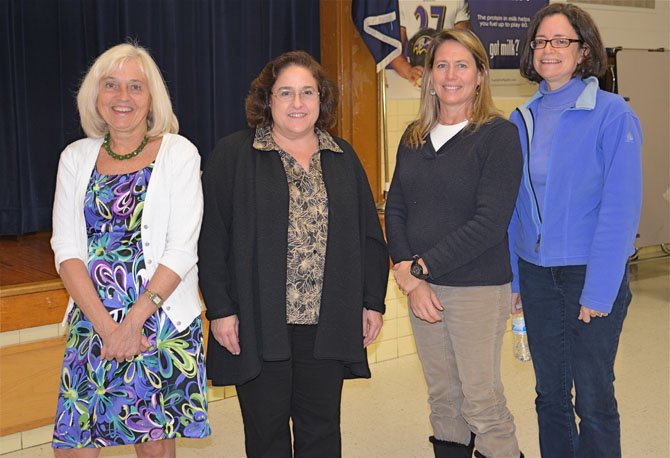 Would you send your teenagers to school or put them behind the wheel after allowing them to down two or three alcoholic beverages? Hopefully not. But the effect of sleep deprivation on the average adolescent has been shown to be impairment equal to – if not more than - just that amount of alcohol. And more and more parents, teachers, school authorities, doctors, and many others increasingly agree that the sleep-deprived state is the plane on which the majority of our kids exist today. One way to help them catch a few more hours of sleep per week is to delay the school start time.

From left: Fairfax County Public Schools Board Members Patricia Reed (Providence District) and Megan McLaughlin (Braddock District) attended the meeting at Frost Middle School to update the community on FCPS’s goal to bring later start times to the region’s high schools. Both are ardent supporters of the plan.

You would think that a small change in the start times of Fairfax County high schools – from 7:20 a.m. to 8 a.m. or a bit after - would be a relatively simple thing to enact. Like Captain Picard aboard the Starship Enterprise, why can’t the Powers That Be simply command "Make it so," and that would be the end of it? "There’s a huge ripple effect to be considered," explained Patricia Reed, Fairfax County Public Schools (FCPS) Board Member, Providence District, to a small gathering last Monday night at Frost Middle School in Fairfax, organized by a partnership of PTAs and the founders of Start Later for Excellence in Education Proposal (SLEEP). Reed is a supporter of the delayed start times and sympathized with the frustration being expressed by the assembled parents and other stakeholders. There was lots of head nodding and murmurs of agreement when Mantua resident Shannon Murphy asked questions like, "How much of the decision to move forward is based on transportation issues and expense? On budget shortfalls?" and "Why can other counties like Arlington and Loudoun start later, but Fairfax is taking years to get to the same place?"

Reed and her fellow Board Member, Megan McLaughlin (Braddock District) addressed the audience for almost an hour, while awaiting the arrival of the evening’s key guest speaker, renowned sleep authority Dr. Judith Owens, Director of Sleep Medicine and Children’s National Medical Center in DC, and the head of the consulting collaborative contracted by FCPS to study the proposed new start times and provide workable solutions for their enactment. Both could not have spoken more passionately on the topic. "As Dr. Owens will elaborate upon," stated McLaughlin, "our sleep deprived kids are a quiet health crisis in Fairfax County."

McLaughlin and Reed gave a succinct, and often brutally honest, history of the movement toward delayed start times in the county. "Even though the vast majority supports later start times, when we presented the final proposal for implementation in 2009, almost everyone protested, even those most in favor of the idea," admitted McLaughlin, "and the change was ultimately voted down. Some people took that to mean that later start times weren’t wanted, but that wasn’t the case. The solutions that were presented at the time were flawed, didn’t take into account all of the obstacles or solicit enough input from the parents, teachers, administrators, transportations providers, and all of the others who would be affected by the change."

"So what will give this attempt a greater chance of success than the 2009 effort?" asked a number of the attendees, almost in unison.

ONE SIGNIFICANT DIFFERENCE is the change in the makeup of the Board since that time, as well as the arrival of new Superintendent of Schools, Dr. Karen Garza. "I am really hopeful that we will get this done," said McLaughlin, "and Dr. Garza has shown real support for this change." The gathering shared her enthusiasm, but expressed dismay when warned that a county-wide roll-out probably wouldn’t happen in time for the start of the 2014-2015 school season, although McLaughlin expressed confidence that some sort of limited implementation could possibly be ready by then. "In the end, it may not be a one-size fits all solution for every district and every school, given the differences in the communities throughout our county," said Board Member Reed.

"We are taking into account transportation issues, athletic programs, daycare concerns, students who work after school, even the amount of homework our students are given," said Reed. Dr. Owens, her team and her collaborators hope to present their "Blueprint for Change" to the Superintendent and the Board sometime in January of 2014. Reed and McLaughlin did not provide specifics, but spoke to some of the barriers that are being addressed. "No doubt you have all been hearing about our budget shortfall, so cost is always a consideration. But there are ways and means to find the money," stated McLaughlin. "We are talking a serious threat to our children’s health and welfare. We need to get more serious about finding the means."

Shannon Murphy and several others complained of bus stops where there are no students to collect, and others where it takes several weeks at the start of each school year for a bus to consistently collect. "They say Fairfax County runs the second largest fleet of buses after Greyhound," noted McLaughlin, "so I know there are some problems we need to work on." Several audience members responded that the county should consider contracting transportation to Greyhound, or even to FedEx as companies known for their ability to provide efficient routing and logistics on a large scale.

Teacher morale, the perception of too much administrative work versus teaching time, and other transportation disconnects – like Woodson students getting out of school at 2:05 p.m. but having to wait until 3 p.m. for sports practice to begin were some of the other topics that Reed and McLaughlin gamely tackled from the audience before Dr. Owens took the floor.

Dr. Owens, the author of over 100 research and review articles, chapters and books on the topic of pediatric sleep, highlighted the work of her consulting team, then provided an overview on the science of sleep and adolescents. As FCPS Board Member McLaughlin promised, for many Owens’ presentation was, indeed, eye-opening.

Districts with start times like ours have significantly higher teen car crash rates.

1 in 4 Fairfax teens suffers from symptoms of depression.

2 in 3 Fairfax teens are severely sleep deprived (lose 2 or more hours of sleep every school night).

Teens with later school start times do get more sleep. This advantage adds up to almost one month of sleep gained by the end of the school year.

Information from the Start Later For Excellence in Education Proposal (SLEEP) (www.sleepinfairfa... for references and research)

A MEDICAL DOCTOR as well as a researcher, Owens presented physiological evidence that at puberty, the adolescent brain experiences numerous changes, including a shift in the body’s "master clock" that controls circadian rhythm, influencing sleep-wake cycles among other bodily functions. "At adolescence, kids are just programmed to sleep a little later, stay up a little later," said Owens. "Forcing them to ignore this biology disrupts the sleep cycle, sometimes dangerously. The deepest REM sleep takes place during the last third of sleep, just when we are waking them up to get ready for the bus. As the week goes on, the child gets more and more sleep deprived, then tries to ‘catch-up’ with a long sleep on the weekends." Studies show that there is no real benefit to the "catch-up plan." "Instead," said Owens, "it’s like these kids eventually enter a semi-permanent jet lag state. Not exactly peak conditions for learning, thinking creatively, engaging in sports, or just about any aspect of daily life. Worse, studies are showing sleep deprivation in our kids is having negative effects on their health and welfare a long way down the road as well." Owens provided data linking prolonged abnormal sleep patterns with diabetes, obesity, depression, bipolar and other disorders.

Owens discussed examples of other districts around the country that have made the change to later start times. She provided statistics from these school districts showing increased attendance, decreased tardiness, reports of less depression in the student population, better test scores, and "Here’s a biggie," she said. "The data shows the areas where school starts later for high schoolers report fewer car crashes involving these young drivers. When you think about it, it makes sense. The kids behind the wheel are more awake and more aware of risks."

To date, she has spoken at more than ten PTA-organized events and continues to solicit input from the public. "I am ready to keep showing up to talk about these issues and get feedback and suggestions. Changing the start times of high school is key to solving this growing health crisis, but we still need to educate students and parents on the importance of getting enough sleep."

More information on the proposal and on the science and statistics of sleep in adolescence can be found at the Fairfax County Public Schools’ website, www.fcps.edu, Dr. Owens’ website www.smartschoolstart.org, and at the SLEEP website www.sleepinfairfax.org.