“Preliminary work on the audit indicates that this year the town has had an exceptional period, we’ve provided a net $507,000 to the unassigned fund balance at the end of the fiscal year, which will give the town an estimated fund balance of approximately $7,045,000, which is up substantially over the previous year,” he said. 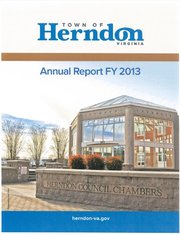 The Town of Herndon has released its annual report for FY2013.

“[Business and Professional License] fees continued to be strong in the past year. We did not yet see the impact of the sequestration, which we expect to see more of in the coming year as the federal government continues to cut back in its spending,” he said. “Some revenue increases were offset by reductions in earnings, particularly in our interest income and fines and transient lodging taxes, which is where we saw some of our largest reductions in income.”

Other highlights mentioned by Anselene were: $1.4 million in grant funds for transportation improvements, a $200,000 grant for trail lighting along the W&OD Trail and $340,000 from Fairfax County for stormwater management improvements.

According to the Herndon Police Department, three planned DUI checkpoints were conducted over the year, which saw a 40 percent increase in arrests for drunk driving over the previous year.

FY2013 saw the town’s Centennial Golf Course partner with Golf Channel Solutions to promote the course, resulting in 1,232 rounds of golf, $61,124 in revenue, sold since its inception in August 2012.

The full report, as well as an executive summary, can be found at www.herndon-va.gov.