The Flu Vaccine; Its Time To give It a Shot
Votes

The Flu Vaccine; Its Time To give It a Shot

On the Job with Potomac's Rite Aid Pharmacy Staff 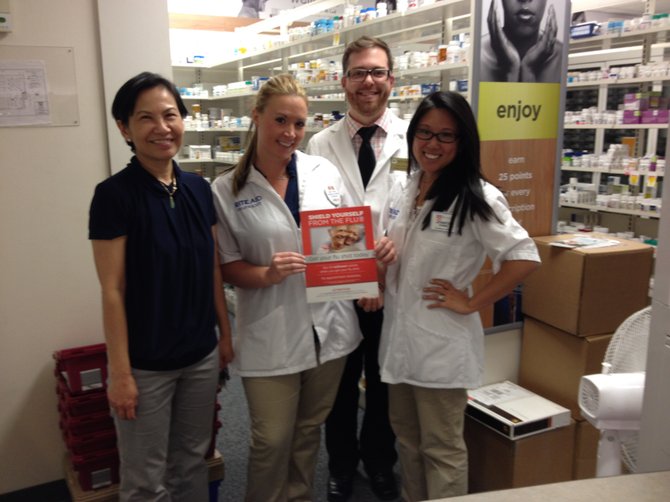 Potomac — More than 200,000 people are hospitalized each year for complications stemming from influenza (“the flu”). These most commonly include muscle inflammation, sinusitis and bronchitis. More serious complications, however, can lead to viral or bacterial pneumonia, inflammation of the heart muscle and sac and even disease of the central nervous system.

Last year’s virulent strain resulted in higher than usual hospitalizations and thousands of deaths, many of them children. One of these children, a 17-year-old Texas boy, died only six days after contracting the flu. Like many kids his age, he had not been vaccinated. The Center for Disease Control (CDC) estimates that over a period of 30 years, between 1976 and 2006, flu-associated deaths ranged from a low of about 3,000 to a high of about 49,000 people.

How does influenza kill? According to the CDC, influenza kills chiefly through its complications. Especially in the elderly, influenza can cause death through pneumonia and through exacerbation of underlying chronic conditions.

While these factors alone should be enough to send people running for the shot, the truth of the matter is that less than half of the American population will get vaccinated this year. Why the reluctance?

According to Lindsay Smith, PharmD, head pharmacist at Potomac’s Rite Aid Pharmacy, people avoid the flu shot for a number of reasons including aversion to shots in general and the mistaken belief that if they got the vaccine last year they don’t need another one. Still others believe that they only need to get vaccinated if their family and friends get sick with the flu.

“Flu vaccine is the best protection we have from influenza and its complications.” said Smith, adding, “Vaccinating large groups of people is what we refer to as ‘herd immunity.’ If enough people around you in the herd have gotten the flu shot, this can help stop other people from getting sick.”

Though the flu vaccine is inactive, containing no live influenza virus, many people still fear they will contract the virus if they get the shot. This incorrect understanding may stem from mistrust of vaccines in general, specific religious beliefs regarding the practice, or simply a lack of clear information on the issue. Flu viruses are always mutating and while the vaccine cannot prevent all cases of flu, it is still the best defense against the disease.

Designed to protect against three different strains of flu, the precise make-up of the influenza vaccine is determined each year by CDC experts based on predictions about specific viral strains. The experts analyze the many forms of the disease from around the globe and attempt to forecast which strains are most likely to mutate and cause the most damage. “It is the CDC’ s best guess as to how the flu will mutate this year and what strains will be the strongest,” said Smith. Choosing among the many viral strains means that some less threatening ones may go uncovered. This, and the ever-mutating flu strains, explains why some people still get the flu even though they already received the shot.

Constantly in receipt of virus samples from around the world, the CDC identifies and studies the most virulent strains. Scientists then inject parts of these strains into fertilized chicken eggs or cell-culture mediums to incubate them. The outcome of these experiments determines the make-up of the vaccine. Each vaccine is tailor-made anew each year to confront the viral challenges of the season.

Once the live viruses are harvested from the eggs, they are “purified” by chemicals that kill them while preserving their key characteristics. The resulting inactivated vaccine constitutes an infinitesimally small amount of the original three viral strains, or less than one-fifteen millionths of a gram. The “fake” viral capsule basically mimics the flu. Explained Smith, “The flu shot is essentially a test run for your body. It sees the fake capsule and attacks it. So, when it actually encounters the live virus it will notice it and then it can fight it off.”

Smith advises that it is never too early to get the shot. Each year, the formulation is added to and improved. This year’s shot is composed of the three strains, H1N1, H3N2 and B Strain. Although the flu vaccine has included H1N1 for the past few years, the strain has mutated three different times and only gets stronger with each passing year. “It is never too early (or too late) to get the flu shot. It is the best preventative thing we have developed so far, “ said Smith.

Flu seasons vary in their timing and predictability. They can begin early in the fall, usually peaking in January and February, and can last late into the spring. Rite Aid expects to increase its number of vaccinations this year 15-20 per cent to over 2,000 shots. Three flu clinics are scheduled. Rite Aid also offers off-site vaccination services to companies. “We will bring all the supplies to you and bill the insurance company,” said Smith.

The CDC has recommended since 2010 that everyone over the age of six months receive the shot each year. Children 6 months through 8 years of age should get two doses the first year they are vaccinated.

For more information go to http://www.flu.gov or http://www.cdc.gov/flu or call 800-CDC-INFO.