Picasso and Einstein Meet in Vienna

‘Picasso at the Lapin Agile’ 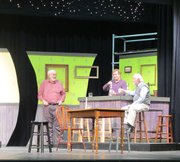 Bill Byrnes, in character as Picasso’s agent Sagot, banters with bartender Freddy as Lapin Agile customer Gaston (played by Josephy LeBlanc) takes it all in.

If you smile at Steve Martin’s humor and appreciate high-quality community theatre, you can find both at the Vienna Theatre Company upcoming production of Martin’s “Picasso at the Lapin Agile.” Characterized as a comedy, the 90-minute one-act play incorporates thought-provoking perspectives infused with episodes of levity. In other words, it embodies the essence of Steve Martin’s humor interpretation.

In this fictional accounting, two famous minds of the early 20th century—Pablo Picasso and Albert Einstein—meet at a Parisian bar in 1904. Amid a cast of colorful and quirky characters, Picasso and Einstein verbally spar about the meanings of science and art. A year after this “imagined” meeting, Einstein publishes his special theory of relativity, and emerging artistic talent Picasso is selling pieces that generate interest in the burgeoning art-as-an-investment community.

“I was fascinated by the trail of Einstein,” said Bill Byrnes of McLean, who moonlights as a theoretical physicist by day. Byrnes’s Sagot, Picasso’s art agent and dealer, recognizes the potential economic value of Picasso’s art pieces and encourages buyers to invest in them. “The play’s a mixture of goofiness and profundity,” said Byrnes. “Genius is lurking everywhere.”

Vienna resident Stu Fischer, a retired attorney, brings Freddy the bartender to life. Freddy plays off the repartee of Picasso, Einstein and Sagot, reacting to clashes and egos breaking out. “He’s not particularly the brightest person around, but, he likes to think he is,” said Fischer. “He likes ideas, he’s interested in the people.

“There’s clever banter going on in the bar that is, sometimes, surreal. They get into silly arguments, and you think, ‘are they really arguing about this?’”

Gaston, as described by Joseph LeBlanc, is the “Groucho Marx of the Parisian bar scene.”

“Nobody impresses Gaston,” said LeBlanc. “He’s just a sarcastic old guy who hangs out there.” LeBlanc himself once visited the real Lapin Agile when he was in Paris, working on his dissertation.

Rehearsals for this production began in August and the cast of characters comes from throughout Northern Virginia. Director Pat Kallman started development of this project a year ago.

“There are some weighty subjects brought up in the bar, even though it’s a comedy,” said Kallman. “You can draw correlations between what they thought then and what we know now.”

The Vienna Theatre Company is sponsored by the Town of Vienna Department of Parks and Recreation, and holds its performances in the auditorium of the Vienna Community Center.

Buy tickets for “Picasso at the Lapin Agile” at the Vienna Community Center, 120 Cherry St. S.E., Vienna, at the door or in advance.

“Picasso at the Lapin Agile” is directed by Patricia Kallman and produced by John Ingargiola. To learn more about the Vienna Theatre Company, go to www.viennatheatrecompany.org.