Upon arriving at the scene, they encountered a 23-year-old female, who made the 911 call, and two males. One male, Waugh, was found unresponsive with what police called “cutting wounds.” 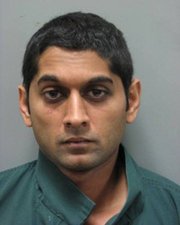 Rahul Gupta of McLean has been charged with second-degree murder of Mark Edward Waugh of Great Falls, stemming from an incident between the two in the early morning hours of Sunday, Oct. 13.

Police took the other man, 24-year-old Rahul Gupta, into custody and he has since been charged with second-degree murder by the Montgomery County Police Major Crimes Unit. He is currently in custody in Rockville, with bail set at $2 million.

According to police, Gupta has a McLean address on record, but is also “known to frequent the East-West Highway address.”

He was an active member of Boy Scout Troop 673, earning the rank of Eagle in December 2007.

While at JMU, Waugh was an active member of the school’s debate team. In 2009, Waugh and his partner were took first place at Novice Nationals, a national championship for first year college debaters.

He was named Cross Examination Debate Association All-American Team in 2012, an honor reserved for the top 30 debaters in the country.

David Barton, a Langley classmate of Waugh and Gupta, and JMU graduate, told JMU’s The Breeze Monday that Waugh was “one of the top debaters that JMU probably ever had.”

Waugh is survived by his parents, Bill and Nancy and three brothers, Matthew, James and John.

Capt. James Daley of the Montgomery County Police told ABC7 news Monday that it was apparent that the two men knew each other, and that it appeared the men were out drinking earlier in the evening celebrating Gupta’s birthday, and upon returning to the apartment, a dispute happened.

Gupta is also a graduate of Langley High School, a member of the Class of 2008. He was pursuing his master’s degree in biomedical engineering at George Washington University.