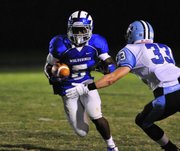 University of Nebraska commit DeMornay Pierson-El is the player opposing coaches know they have to stop in order to beat the West Potomac football team. Whether lining up at running back or receiver, the senior’s speed and quickness make him a threat to score whenever he touches the ball.

Now, coaches will have to account for Pierson-El’s arm.

Pierson-El will play quarterback for the Wolverines after making the transition from running back during the team’s season-opening 51-7 loss to Centreville on Aug. 29. Starting quarterback Preston Jones, a junior, left the game in the first quarter after suffering an injury to his right (throwing) wrist. Shahyeim Wellman, a junior, stepped in at quarterback for the remainder of the first half.

With West Potomac trailing 44-0 at halftime, head coach Jeremiah Davis moved Pierson-El to quarterback in the second half despite Pierson-El having not taken a single practice rep at the position this season. He completed 1 of 4 passes for 87 yards and a touchdown. Pierson-El connected with R. Marquis Saldona for an 87-yard touchdown with 59 seconds remaining in the fourth quarter for the Wolverines’ lone score.

After the game, Davis said he wasn't sure how long Jones' injury would keep him sidelined.

While Pierson-El hadn’t practiced at quarterback this season, he played the position his entire youth football career prior to attending West Potomac High School. Pierson-El, who is also a standout defensive back, is committed to the University of Nebraska as a slot receiver and kick returner.

Pierson-El’s passing skills were evident when he hit Saldona with a deep touchdown toss. Davis said having Pierson-El’s athleticism at the quarterback position will also help the Wolverines.

“There’s no messing up on snaps,” Davis said. “He’s going to grab it high, grab it left, grab it right, run the play. [If it’s a] botched play, [he’ll] cut it back, throw the ball down the field. … Hit the guy in the pads? Yes. Run him over? Yes. Sounds like a football player to me.”

Wet Potomac beat Centreville during the 2012 regular season but was no match for the Wildcats in the 2013 opener. West Potomac’s first possession ended in a safety when Jones was flagged for intentional grounding in the end zone. With a 2-0 lead, Centreville marched down the field for a touchdown on its opening drive. The Wildcats led 16-0 at the end of the one and 44-0 at halftime.

“You get punched in the mouth, it’s a fight,” Davis said after the Centreville loss. “I don’t condone fighting, but some of these guys have never been in a game like that before. They’ve never played football that physical before. We’ve got a ton of young guys. You look at our roster, we’ve got a bunch of sophomores and juniors and a couple seniors sprinkled in. We’re nowhere near as big as we were before. The good thing about that [is] it creates: either you’re going to buy in or you’re going to stay by the wayside, so we’ll know who we got tomorrow. Monday morning, when we practice, who shows up, we’ll know who we’ve got.”