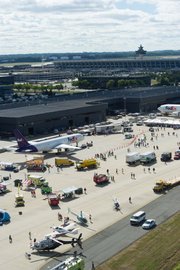 A record-breaking crowd—more than 16,000—turned out for the Sept. 14 Dulles Day Festival and Plane Pull at Dulles International Airport. In its 21st year, the event is a fundraiser for Special Olympics Virginia, pitting teams of 25 against one another to see who can pull an 82-ton, 164,000-pound airplane the fastest. Seventy teams registered to participate in the event, raising over $226,000—a record amount for the event. A new addition to the festivities this year was an early morning 5K on the Dulles runway, in which 2,000 runners participated. A highlight of the afternoon was the arrival of an FA2 fighter attack sea harrier jet, which demonstrated its vertical take off and landing capabilities to a rapt crowd.