Students up and down the Route 1 corridor struggle to meet minimum standards in science. 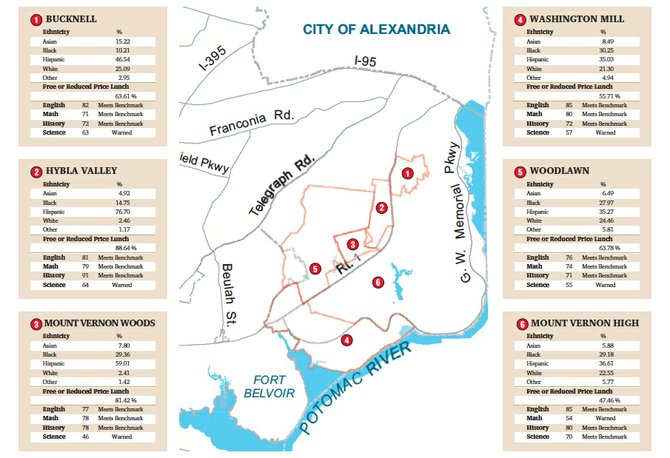 Poor and Latino students clustered along the Route 1 corridor are struggling to keep up with standardized test scores, according to a report issued last week by the Virginia Department of Education. Half of Fairfax County Schools that are accredited with warning are in the Mount Vernon area, where the average school has a majority of Latino students and the typical classroom has 67 percent of students who live in poverty.

"We have so many students who do not speak English as their first language, so we have 14 or 15 different languages going on in our schools," said Jeanette Kraynak, president of the Mount Vernon High School Parent Teacher Student Association. "We also have an area where a lot of people move in and move out. People come here for a year, and they're not acclimated to the program."

"Did we hit a roadblock? Yes, this time we did," said Deborah Tyler, assistant superintendent for this part of Fairfax County. "And are we very reflective and being very proactive in addressing it? We absolutely are."

LOW SCIENCE SCORES were the reason most of the schools dubbed "accredited with warning" failed to make the grade in Fairfax. Overall, nine county schools failed to meet the 70 percent pass rate for science. The remainder of the schools were not able to meet minimum standards for math. That gives them a warning for next year. If they continue to fall short, state regulators will deny accreditation and eventually the school could be taken over by the newly created Opportunity Educational Institution. Many have grown increasingly frustrated that Thomas Jefferson High School, which has a 100 percent pass rate for science, gets all the attention and all the funding.

"These new test scores that came out are part of a legacy of the county over-investing in wind tunnels, optical lasers and wave pools at Thomas Jefferson while you have massive numbers of children waiting for Head Start and subsidized child care," said Del. Scott Surovell (D-44). "What troubles me is that we have a county that's investing $90 million at that school while I can't even get the planetarium in my part of the county to be operational."

Carl Sandburg Middle School has a planetarium that's a relic of the days when the building was a high school. Now the facility is in the midst of a $45 million renovation, although restoration of the planetarium is not part of the renovation. School officials estimate that would cost about $257,000, an amount of money that has yet to be allocated to the project. Meanwhile, county officials say, two of the Mount Vernon schools that have been able to meet state accreditation standards for science are currently receiving STEM grants for science, technology, engineering and mathematics.

"The test has changed," said Tyler. "So we are going back and looking at what we did in the past and what we need to do to change this in the future, and so it's part of our focus."

LATE AT NIGHT on a recent Monday, Kraynak gathered at Mount Vernon High School for an executive board meeting of the Parent Teacher Student Association. As she looked around the classroom, she expressed frustration that it's often difficult to get parents involved in the education of their children. That means many of the PTA meetings have only a handful of people for a school that has more than 2,000 students.

"We hold parent-teacher meetings and sometimes I have 12 parents showing up," said Kraynak. "So I would say the biggest problem we have here is the lack of family support."

As members of the executive committee review their budget for the coming year, a sense of weariness is apparent when the subject of standardized test scores comes up. Everyone acknowledges the importance, but many express frustration.

"Test scores tend to be tied to the socio-economic status of the students, and this particular part of the county has more low-income students," said Dana Melvin, parent of a Mount Vernon High School student. "But parents sometimes avoid the school with really knowing anything about the school or without having come to check it out."