Supervisors, School Board are in annual, budget tug-of-war.

In the best of all worlds, every day would be a holiday and Fairfax County would have all the money it needs to fully fund its school system and government. But since that’s not the case, it’s a battle each year between the school system’s needs and the county’s ability to address them.

“About 52 percent of our budget goes to the schools, and we’ve got a lot of tough choices to make,” said Supervisor Michael R. Frey (R-Sully). “So we’re here to give you some information and we want to get your input.”

He was speaking last Thursday, March 27, before a public budget meeting hosted by the Sully District Council of Citizens Associations at Rocky Run Middle School. Further public hearings will be held April 8, at 6 p.m., and April 9-10, at 3 p.m., at the county Government Center.

“There’s no question, we’re still in difficult economic times,” said Frey. “They started in 2008 and got worse; then things came back slightly. Fortunately, the real-estate market is relatively strong. But as your [property] assessment goes up, you’re going to pay more in taxes.”

He said local governments in Virginia are too dependent on the sales tax. “Other jurisdictions to our east have a meals tax [to bring in revenue], but we’d have to have a referendum first,” said Frey. “I’d support putting a meals-tax referendum on the ballot and letting the voters decide. Local cities and towns that have a 4-percent meals tax receive about $80 million to $90 million a year from it — which is a significant help to their budgets.”

“About 63 percent of our tax base comes from property tax; our commercial percentage is about 18 percent and the rest is residential,” he said. “So we’re working hard to improve the transportation system — for example, in Tysons Corner and with the Silver Line – which is a huge incentive to attract commercial business development.”

But, said Sully District School Board representative Kathy Smith, “The schools don’t have taxing ability. We only get about 20 percent of our funding from the state and about 71 percent from the county.”

Susan Datta, with the county Office of Management and Budget, then gave an overview of the County Executive’s proposed budget. She said the supervisors will make changes to it and adopt it, the end of April. And she noted that sales-tax receipts for March were down 4.1 percent because of the snow.

THE COUNTY’S OVERALL budget is about $7 billion, including a General Fund budget of $3.7 billion. “Businesses are concerned about what’s going to happen with the federal budget, so they’re not expanding,” said Datta. “And the schools are asking for $64 million more than the county has budgeted for it.”

FCPS Budget Director Kristen Michael said the county School Board advertised its $2.5 billion, proposed FY 2015 budget after Schools Superintendent Karen Garza cut $96.5 million from it. “We’ve made significant staff reductions since 2009, froze pay in 2010 and 2011 and made reductions in clerical and custodial positions,” said Michael. “We’re asking for a 5.7-percent increase [in county funding over FY 2014] to cover the cost of uncontrollable increases.”

This number amounts to $98.1 million. Enrollment and demographics, alone, are fueling $25.8 million of this increase. Since FY 2010, enrollment has rocketed by 15,603 students — many of whom require multiple services, including intensive special education. Some 28 percent are projected to be eligible for free- or reduced-price meals, and 15.4 percent will need ESOL services.

And, said Michael, while it costs an average of $11,359 to educate a general-education student, it costs $3,481 more per student to educate ESOL students. The cost to educate each special-ed student is $22,720.

In addition, school-system retirement costs — mainly driven by hikes in the state-mandated, contribution rate for the Virginia Retirement System — have jumped by $38.9 million. Also rising are the health-insurance rates, by $23.9 million, and the step increases for eligible employees, by $41 million.

Nonetheless, to trim FCPS’ budget, Garza eliminated 731 positions: 82 from central support, such as Information Technology; 180.5 from school support, including assistant principals, technology specialists, clerical staff and custodians; and 468.7 from the classroom, including teachers and instructional assistants.

THE SCHOOL BOARD will adopt its budget on May 22 and the County Executive is recommending only a 2-percent increase in school funding over last year. When a female resident asked what the county has done to cut back, Datta said it’s chopped more than $240 million from its budget since 2008, including 650 positions.

So, said Frey, the county has also had to do more with less money and personnel. “When economic times are tough, we have more demands by residents for services,” he said. “More people are needing food, health-care and housing assistance. Our population has also grown, and economic stress leads to more domestic-violence calls.” But, he added, I’m hopeful we’re going to give more than a 2-percent increase to the school system.”

Hoping for that, as well, is Mountain View High librarian Becca Ferrick, president of the Association of Fairfax Professional Educators. “We’re being asked to do more, with less resources and increased mandates, for no increase in compensation,” she said. “So to ask for a realistic 5.7-percent increase and get 2 percent is frustrating.”

“I want to do more for the schools than 2 percent,” replied Frey. “That’ll be a priority of mine.”

In one of the meeting’s few comments not about education, Jeff Parnes — whose wife Daria is branch manager of the Chantilly Regional Library — told Frey the county library system needs the extra $2 million it requested. He said adults use libraries for educational purposes, as well as youth, and many depend on libraries for access to a computer.

The last resident commenting was Montgomery County first-grade teacher Charlene Aguste. “As an educator and a parent, I moved [to Fairfax County] because of the school system, and the student-to-teacher ratio is huge to me,” she said. “But I choose not to work in Fairfax County because of the pay.”

“Teachers are being asked to deal with more students with mental and other issues for such low pay,” she continued. “Without good schools and teachers, Fairfax County will lose its great reputation and people and businesses won’t move here.”

Supervisors, School Board in Budget Tug-of-War 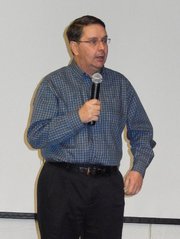