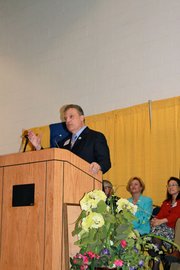 Herndon made every volunteer feel like the town’s gems this week.The 30th annual Mayor’s Volunteer Appreciation Night honored more than 400 people - and three distinguished service individuals with hor d'oeuvres and a few words from guest speaker, Washington Redskins’ vice president and executive media producer, Sunday night.“It’s great to be in a room with solid people,” said guest speaker Larry Michael. “You never know when helping others will pay off three, four, five-fold.”The volunteers were invited to the event for contributing more than 100 hours of service to the community.Michael, now an eight-time Emmy Award winner, first found out what he wanted to be after college while volunteering for the University of Maryland’s college radio station.“I thought I wanted to be a lawyer,” he said. “Within a year, I was doing the radio and doing play-by-plays for basketball and football, and I knew what I wanted to do.”His life has revolved around volunteering. He talked about his work with Hometeam Sports leukemia telethon. Years later, he found out his 7-year-old niece developed leukemia and became even more involved with the telethon and is active with The Leukemia and Lymphoma Society.“You get a satisfaction for making that contribution to the community,” he said.He said the 400 volunteers in the audience should be saluted for being the very definition of volunteerism - for creating a symbiotic relationship with the community to build trust and solidarity.Mayor Lisa Merkel presented the Distinguished Corporate Service Award to COSTCO Northeast Region’s executive officer Mary Conoboy. According to a press release, Conoboy and COSTCO helped to donate holiday dinners and organize toy drives for people in Herndon, Ashburn and Sterling.The individual Distinguished Service Awards went to Patti Schule, Lisa Lombardozzi and Doug Downer.Schule was nominated by Cornerstones for asking her church to provide weekly dinners to homeless community members and recruiting hundreds of other volunteers to give their time to Cornerstones, according to the press release.Lombardozzi was nominated for organizing coat and food drives in addition to serving as Parent Teacher Association President for Herndon Middle and High School.Downer, who had been the youngest Herndon Chamber of Commerce president, was nominated for being the visionary behind Friday Night Live!, which is entering its 20th year, according to the press release. He also volunteers with Herndon High School and area elementary schools. This was his second Individual Distinguished Service Award.“We’re a small town, and we’re honoring over 400 people here,” said Merkel. “Everyone in this room has a role to make this community stronger.”