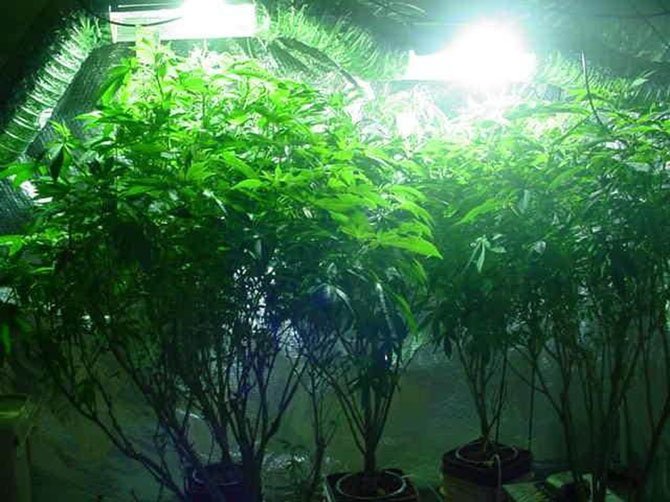 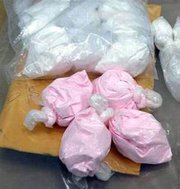 Drug dealers often mix bags of cocaine with Kool-Aid to disguise it and prevent drug-sniffing dogs from detecting it.

Centreville — Lt. Jim Cox is a 26-year member of the Fairfax County Police Department. From 1995-2001, he was a detective in the Organized Crime and Narcotics (OCN) Division; and since 2004, he’s been an OCN supervisor.

But the ever-changing world of illegal drugs still keeps him on his toes — and battling to take down the dealers who ruin lives for profit.

“I know a lot about narcotics,” he said. “But every day, something new comes on the market.”

Cox was speaking before a recent meeting of the Sully District Police Station’s Citizens Advisory Committee, and the topic was drugs and organized crime. He said the OCN has three units dealing with street crimes (gangs), narcotics and money laundering.

The narcotics detectives handle the “higher-end drug cases” involving substances such as heroin and meth. They also work with the FBI and other federal agencies. And Cox noted that the OCN’s 40-caliber guns were paid for by seized drug money.

He discussed various drugs, starting with marijuana. In Virginia, he said, medical marijuana prescribed by a doctor has been legal since 1950. And he described a big marijuana bust police here made in 2007.

A man had a “grow operation” on 10 acres off of Union Mill Road in Clifton, where he rented a house just for that purpose, while living in Fairfax. “Our helicopter used its flare over the house to sense the heat from the operation,” said Cox. “And once inside the house, the marijuana smell was overwhelming.”

“There was a closet next to the refrigerator in the kitchen; and when you pushed on the door, there were steps leading to the basement where the plants were,” he continued. “He had 175 plants, and each one yields 1 pound of marijuana. One ounce of marijuana costs $600-$700.”

According to Cox, “kind bud” and “chronic” marijuana sell for $8,000 or $9,000 a pound and “give a powerful high. So there’s more of a demand now for marijuana than crack cocaine — and they’re sending it through the mail.”

He said marijuana is often disguised as something else to avoid detection by the authorities and also to make it more appealing. THC is the main, mind-altering ingredient in marijuana, and Cox said dealers take liquid marijuana and liquid THC and “make candy out of it or put it on cigarettes. They’ll also make marijuana butter and use it to make cookies, brownies or Rice Krispie Treats to sell to high-schoolers.”

So he advised parents to ask their children if they’re using drugs. “Have a conversation with them,” he said. “Check your kids’ phone and Internet; you need to know what they’re doing 24/7.”

Cox said meth is also available in Fairfax County. “You can go into any drugstore and buy everything you need to make it,” he said. “You can get enough to stay high for 14-16 hours.” But police know what goes into meth and are alert for anyone buying those ingredients in large quantities.

For example, he said, “We found out that drums of certain chemicals were going to a townhouse near the Burger King off Route 28 [in Centreville]. We made an arrest and [the recipient] was convicted.”

Some of the meth-making elements parents should watch for, said Cox, are acetone, alcohol, salt, batteries, lye, matches, engine starter, drain cleaner, iodine, coffee filters, propane tanks and a solvent called toluene. He said they should also be on the lookout for common-cold pills containing ephedrine or pseudoephedrine or muriatic acid, used to clean brick and stone.

And he warned residents not to make coffee in a hotel or motel room. “Because toxic waste is created when people make meth, they often cook it in coffee pots in hotel rooms,” said Cox. “But it leaves a toxic residue in the pot, even after it’s washed out.”

Furthermore, he said, “Meth oil is often imported in bottles of tequila. Crystal meth is often transported across the U.S. as colorful bath gel — and this meth ice is the most powerful form. Meth users feel like they have bugs inside them and try to scratch and peel them off.”

Cox said 99 percent of the drugs here, except for marijuana, are imported from other countries. “Tell your kids, friends and family that 70,000 people in Mexico died over cocaine in recent years,” he said. So, said Cox, people who use cocaine are perpetuating the tragedy. He also said one way dealers smuggle it into the U.S. is by putting Kool-Aid into bags with the cocaine “to defeat the drug-sniffing dogs” at the airports.

Regarding heroin, he said, “The saddest day of all is the day you lose your kid to drugs. So tell your kid, ‘You just don’t know what you’re putting in your body.’ Cocaine is not made at CVS [Pharmacy], and heroin laced with fentanyl is what killed Philip Seymour Hoffman.”

“When you’re buying heroin, coke or weed from your local drug dealer, it may not be those things,” said Cox. “The bad guys don’t care about you — they care about making money. If your child dies, there’ll be someone else waiting behind him to buy these drugs.”

He said police don’t see much LSD in Fairfax County, but “we see some of it. It’s a hallucinogenic drug, and these hallucinations can be exciting or frightening — so the users are going to act violently to protect themselves. It’s sold in colorful stamps, each with four hits of LSD on it.”

As for ecstasy, also hallucinogenic, it comes in colorful pills. “We don’t see it as much here, but it’s still out there,” said Cox. “Mollies [amphetamines] come in capsules and psilocybin is on mushrooms. We also see a little bit of PCP use, plus prescription drugs.”

Also troubling, he said, is K2. It’s sold as herbal incense or potpourri for $35 for a 3.5-gram pack. “It’s synthetic THC and we still see this in Fairfax County,” said Cox. “They changed the molecules so it’s not illegal. They’re marketing it to kids, so check your kids’ Internet for any purchases made overseas.”

He also advised parents to go to the Office of National Drug Control Policy Website, http://www.streetlightpublications.net/misc/ondcp.htm, to learn the street terms and slang for drugs and stimulants. That way, he said, “If your kids are mentioning these things on their cell phones, you’ll be aware.”