Outreach efforts get people in for tuberculosis treatment before it spreads. 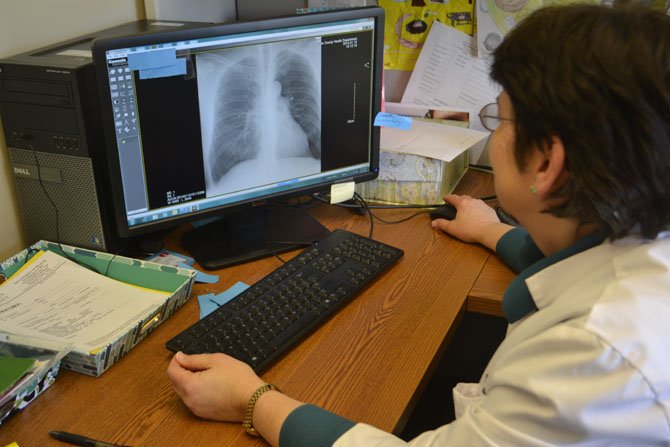 When Dr. Barbara Andrino came to the Fairfax County Health Department in 2011, there were 137 cases of tuberculosis in Northern Virginia.

Back then, the state of Virginia had more than 200 TB cases. But in 2013 Andrino saw the lowest number of TB cases both during her time at the county health department and over the past several years across the state and in Northern Virginia.

“Our goal is to try to reach people before they become ill,” said Andrino, who works at the Fairfax clinic as a full-time TB primary care physician.

Since 2007 the number of TB cases across the state has decreased by over 42 percent, and in Northern Virginia by over 45 percent.

According to statistics from the World Health Organization, TB is second behind HIV/AIDS in deaths from an infectious agent worldwide. And although it is a curable disease, TB still kills three people every minute.

Compared to other jurisdictions in Virginia, Fairfax County has the highest number of people infected by TB, followed by Prince William, Arlington, Alexandria, and Loudoun.

TB EXPERTS like Andrino attribute high numbers of the infection in Northern Virginia, especially in Fairfax County, to the high number of foreign-born residents in the region.

“The majority of our patients were born in other countries or born in countries that have a high prevalence of tuberculosis,” said Andrino.

Andrino says that since TB is considered a taboo disease in many countries around the world, most people don’t realize that TB is curable and is only infectious when airborne.

“It’s really not that easy to get in some ways,” said Andrino.

TB SPREADS between people when the infection is in the air. Someone will only catch the infection if they inhale when those around them with TB in their lungs coughs, spits or sneezes.

The World Health Organization estimates that one-third of the over 9 million TB cases around the world have what is called latent TB, which is when the infection is not yet harming the person or contagious.

People can live with latent TB for years without knowing. Only once the person gets sick does the infection becomes active, and symptoms like the cough, fever, weight loss and night sweats over the course of months make it highly contagious.

“People don’t think about TB as something they might have and they don’t think to seek medical treatment,” said Jane Moore the Virginia Department of Health’s director of TB Control and Prevention. “They just think they have the flu or bronchitis.”

Although most of the TB cases in Virginia and around the world are latent and inactive, many wait until it’s too late because they are unaware that what appear to be common symptoms of the flu are actually deadly.

“People who have TB don’t think that they have it and don’t seek treatment,” said Moore. “Once they get there, people don’t think about TB as a condition and that way are not treated appropriately and they remain infectious and spread it longer.”

BUT BECAUSE TB is still prevalent in Northern Virginia, experts at the state and local level agree that until the misconceptions that surround the disease are gone, the best they can do is educate people, especially those from multiethnic backgrounds in the community.

Data from the Virginia Department of Health showed that the top five countries of origin with the highest rates of TB cases came from India, South Korea, Mexico, Vietnam and the Philippines.

More recently, local health departments have increased their outreach and education efforts to reach out to people in communities at risk across the state.

Jessica Werder, Fairfax County Health Department’s community outreach manager, says that through her direct work in educating communities with high rates of TB in Fairfax, she still sees that many people are afraid to seek care because of barriers in the community.

LOCAL NORTHERN VIRGINIA clinics offer educational pamphlets in different languages, and have partnered with key community leaders in hopes of raising awareness about TB treatment in communities where English is a second language. Now, they hope to give people the information they need to know about TB so that the community understands that it’s curable, preventable and isn’t something that people should be shameful of getting treated.

“The health department and the county at large are very aware at the fact that, with a diverse population comes the need to figure out how to engage residents who do come from diverse backgrounds,” said Werder.

Although both state and local health department TB representatives agree that the number of TB cases can be unpredictable each year, they hope that their efforts will continue to keep numbers as low as this year.

“We need to work with them [people in the community] saying ‘no anyone can get it … there’s no reason to be ashamed,’ said Glen Barbour of the Public Safety Information Office at the Fairfax County Health Department. “Our bottom line message is: You have to know the symptoms so that if you experience them you know to go see a doctor.”