In the second year, the race has gained momentum, more runners, and two vendors. 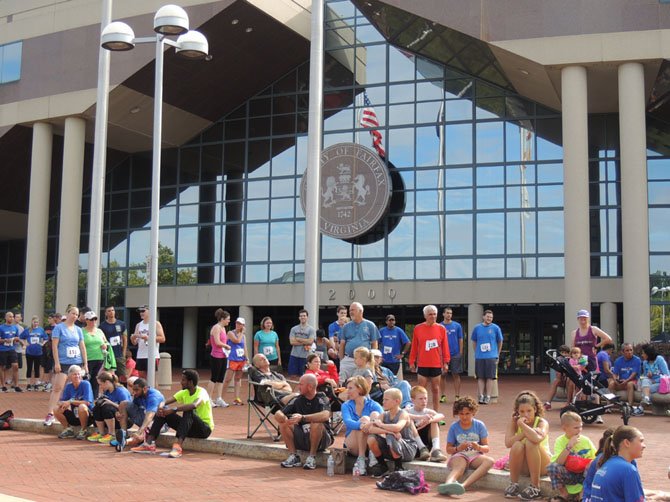 Runners and supporters gather around for the awards ceremony after the 5K and Fun Run. Photo by Phoebe McPherson/The Connection 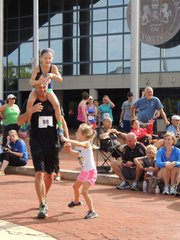 Fairfax resident and firefighter, Samuel Gray, walks through the crowd with his two daughters. He placed 3rd in his age group for males with a time of 20:59.

Crime Solvers also added the “Public Safety Challenge,” between the Sheriff Department, Fire Department and Police Department. Community members could choose to affiliate with one of the departments while registering to be a part of the competition. The group with the most participation won the title and trophy of Public Safety Challenge winner, which would later go to the Fairfax Fire Department along with a sizeable trophy. The top four finishers (minimum: one female and one male) being Andrew Coston, 25, of Ashburn, Brad Meletti, 31, of Fairfax, Sam Gray, 47, of Fairfax and Melanie Jenkins, 35, of Vienna.

But two long-time friends and runners proved that age is but a number in the running community: 77-year-old Chan Robbins of Arlington and 89-year-old Dixon Hemphill of Fairfax Station stood together after the race and during the awards ceremony.

“We’ve been friends for years,” Hemphill said. “We met through races.”

Both have been running for roughly 40 years.

“I’ve been running for almost 39 years,” Robbins said with a smile.

Fairfax Crime Solvers was founded in 1979 and is the oldest branch of the organization in the state. The nonprofit endeavors to bridge the gap between law enforcement agencies and citizens, especially in respect to unsolved crimes through their use of an anonymous tipping service.

The event as well became a jumping off point for National Night Out with the Fairfax Police Department and Sheriff just three days later.

“It’s an opportunity to remind people that public safety is a partnership with our community,” Donaldson said.

In the second year of production, the race has gained momentum, more runners, and two vendors.

“Capital Area Running put on the event this year, helping with fundraising,” Donaldson said. Vendors, Rita’s and Foster’s Grille were there also. “We raised over $4,000 for the program…we’re hoping to make more than that that [this year].”

For more information about Crime Solvers and how to get involved, go to www.fairfaxcrimesolvers.org