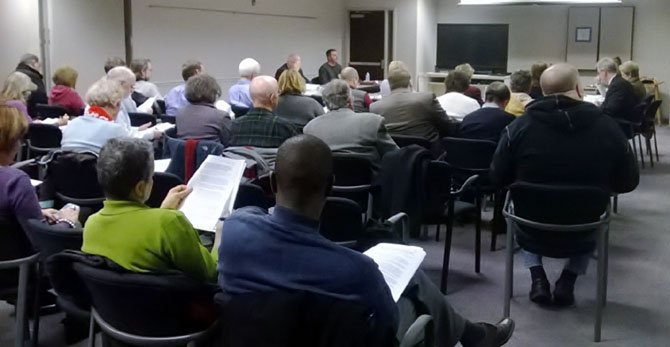 The Residential Studio Committee, pictured here in January, has been disbanded and the residential studio amendment was tabled at the July 30 meeting of the Planning Commission. Photo by Janelle Germanos.

Although more than 15 public meetings and seven committee sessions have been held since Oct. 13, the Fairfax County Planning Commission voted unanimously last week to table the proposed Residential Studio Amendment, which would have provided apartments to residents working low-income jobs.

“It was unlikely that the Residential Studio Committee would reach consensus about the proposed use. There were several unresolved issues, such as the districts in which RSUs should be permitted, the potential scale of the use, potential modifications and waivers under the special exception process, and the potential for impacts on surrounding properties,” said Tim Sargeant, an at-large member of the Planning Commission and chair of the Residential Studio Committee, at the July 30 meeting.

The Residential Studio Committee was created following the Board of Supervisors authorization of a Zoning Ordinance Amendment in July 2013. This would have allowed these efficiency apartments of at least three per building and not more than 80, to be designated for at least 80 percent of residents in any building who make less than $45,000 per year, or more than 60 percent of the median income of the area.

The committee, however, has been disbanded.

“It became apparent that additional dialogue is necessary regarding affordable housing,” Sargeant said.

At the community meetings, many residents voiced concerns with the amendment, including where the RSUs would be built.

“It is not an easy discussion, but it is necessary. Our region and county population continue to increase and our workforce economy continues to change. The discussion of affordable housing is likely to come up again as we continue to look at ways to manage growth and meet the housing needs of future generations,” Sargeant said.

“I just wanted to say that this is a beginning, not an end. It’s an important discussion. It’s a critical topic for the county and for young professionals and for people of limited income. I hope we will not allow the report to languish and find a way to make these concepts reality,” Janyce Hedetniemi, at-large member of the planning commission, said at the meeting.

According to a December 2013 study conducted by George Mason University’s Center for Regional Analysis, 548,298 housing units need to be added to the Washington, D.C. area in order to support the region’s 857,334 net new jobs, which will be added from 2012 to 2032. This includes entry-level positions and other low-wage jobs.

The study also found that the housing for the workers needs to be affordable, with a requirement of 44.1 percent of the new housing units to be less than $1,250 per month.

According to the Northern Virginia Affordable Housing Alliance, in 2013, a person earning minimum wage would have to work three full-time jobs that pay this amount of $7.25 per hour in order to afford an efficiency apartment in the county.

The Fairfax County Department of Housing and Community Development is expected to announce an $8.8 million fund for affordable housing projects within the county in early August. This combination of local and federal funds will work to provide workforce housing and low-income housing for seniors, homeless and those with disabilities.