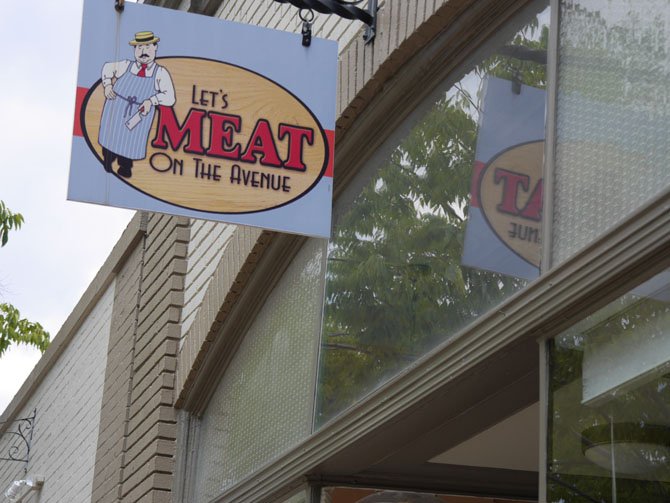 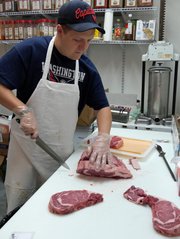 Matt Ruble cuts ribeye steaks by inserting the tip of the knife in front and cutting to the table with a rocking motion, then cutting off part of the fat but leaving on a small piece for flavor. 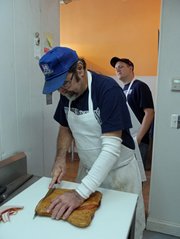 Matt Ruble watches while his partner butcher Bill Pyne cuts another tray of applewood smoked bacon at Let's Meat on the Avenue in Del Ray.

Matt Ruble asks a regular customer, "Just eggs today?" as she peruses the freshly cut meats in the case at Let's Meat at the Market.

It was early afternoon, and Matt Ruble was putting out the third tray of freshly-cut applewood bacon for the day. Bill Pyne has just hauled it out of the cooler and cut it into thick slices in the back. Ruble is answering the phone and chatting with customers. Some customers come in just to talk. "This bacon is very tasty — it smells like you're cooking it over a wood fire. Since today is my friend's birthday, I dropped some off for him this morning." He tells a customer to cook it in the oven and to soak it in ice water first to shock it. Then it won't shrink as much.

In addition to the bacon, he said they cut fresh hamburger every day and steaks from the back as needed to keep things fresh. One day he had just opened up about 11:30 and got a call for a gift certificate for $600. “I asked if she was from around here, and she said no, she was calling from England and was getting a wedding present for a local. I told her I hoped they liked meat a lot.”

"Smell that?" Ruble said, "I'll bet it’s the andouille sausage that Bill and I just finished casing." Pyne is the other part-time butcher. "We have expanded the different kinds of sausage we make. A customer wanted us to try Caprese so we mixed up a trial batch with pork, salt, cayenne, pepper, white wine and cumin."

Twenty- six jars of spices, dry mustard and vinegar line the overhead shelf beside the white counter where they butcher. A customer volunteers that he tries all the new sausages and you either like them or you don't, but he loves the Italian.

Ruble said two days ago the South African embassy put in a special order for 7 pounds of boerwurst. "They won't let you link it; it has to be the authentic South African way in a two-foot tube and coiled."

The Arabian embassy gets five whole rib eyes cut into two and a half inch thick steaks. "Those bad boys are expensive."

He said we recently got another special order for three pounds of ostrich steaks at $30 a pound. But the customer hasn't shown up to pick them up, "so we're trying to decide what to do with them." Eventually he pointed out, since the new owners are remodeling, the plan is to have a case for exotic meats.

The door rings as a customer enters and heads for the meat case. He is making Chinese meatballs and this is the only place he could find pork belly. Despite all of the specialty items, Ruble says the most popular with the customers are the ribeye steak and New York strip. And the dark chocolate milk in the dairy case with farm fresh brown eggs and Amish butter. "Be sure you wear a hat because the chocolate milk will blow your mind."

Cutting meat isn't as hard as people think, Ruble points out. "The trick is to identify the grain and to cut against the grain," he said, pointing to a picture of a sirloin. "And it isn't really too messy except that day the casing had a hole in it and sausage sprayed all over."

He added, "You need knife/hand skills, a sharp knife, an ability to retain information. It helps if you don't talk while you're cutting because you can get nicks and cuts. And also you need a sense of humor or you don't last very long."

Rubin points out that cutting meat is very stress relieving. "You go back there with a knife'" and the rest of the sentence was up to the imagination.

Rubin usually starts his day at 10:30 so he has time to get the case set up before the customers start coming. "We try to be fast because there is two-hour parking." He likes to make everyone feel like it is their turn. Some people just stop by to talk. Later in the afternoon people come by for dog bones. "As they are walking by, the dogs smell the meat and strain at their leash to come inside. At the end of the day I wipe off the prints and snout marks on the windows."

Ruble works part time from Tuesday-Friday as he pursues a complementary career with a volunteer fire department. He says he has worked every holiday since he was 17 because holidays are meal-based and people wait until the last minute. Before coming to Let's Meat on the Avenue at 2403 Mount Vernon Ave. three weeks ago, he worked at Food Lion for 13 years.

"For a while I cut meat in Italy," he said, "because I got over there and didn't exactly understand the relationship of the Euro to the dollar. I love to cut meat, but when I was in Bora Bora you could hear them slaughtering out in back. I couldn't do that. I like the American way."