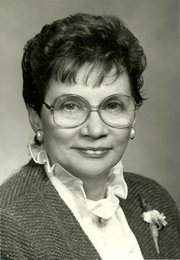 Photo courtesy of the Keating family

Gladys Keating. “When Kingstown started to be built,” said delegate Mark Sickles, “she was worried politically: ‘I don’t know how anyone who can afford a $200,000 townhouse would vote for me.’”

“Gladys was a remarkable person who brought a community perspective to legislation passed in Richmond,” said Mount Vernon supervisor Gerry Hyland. “She was a warm, concerned and dedicated public servant who, through her efforts, made thousands of lives better.”

Keating’s 22-year career as a delegate spanned 1977-2000. In that time, she fought hard and tirelessly for consumer rights, family law reform and women’s rights.

Before Keating was first elected, “Virginia was quite a different place,” said Janet Carver, currently vice chair of the 11th democratic committee and longtime friend and supporter of Keating. “Once when somebody was killed in Vietnam, the court had to appoint a lawyer so that his wife was able to take care of his children -- she was still under the setting of property or child.”

“You would not believe how bad divorce laws were here for women,” current 43rd district delegate Mark Sickles recalls Keating saying to him. Sickles worked for Keating as a volunteer in Richmond during regular sessions in 1997, ‘98 and ‘99.

“She was very appreciative of anything I did,” Sickles added. “I was learning about the system and also helping her communicate with her constituents. It was good to work for her. She was always complimentary of what we would produce, prepping for town meetings.”

Montebello resident Gloria Haher was a longtime aide to Keating. “She was really the best of bosses,” said Haher. “What really impressed me was that she listened to both sides. On any question. There was always access to her. She was a very honest person.”

Carver’s favorite Keating anecdote goes back to before she was elected delegate:

“She ran three times before she won,” said Carver. “The first time she ran, in the early ‘70s, it was the era of the equal rights amendment. And Gladys did not support it. We had argued with her -- those who’d just met her for the first time.

“The second time, I was chairman of Springfield Democratic Committee and we were down at Garfield [Elementary School] for a meeting. Gladys was running, with two men. My friend Judy Finney got up and said, ‘Gladys, last time you ran, you didn’t support the equal rights amendment. What changed your mind?’

“Her eyes were very reserved. She was smiling with her lips but not with her eyes. ‘It was running with two men.’ And it just broke the house down. Really quite marvelous. She’d never experienced any discrimination until she became a candidate. Suddenly when she was running with two candidates, you know there’s going to be tension between them. When they got together and really excluded her, expected her to clear the table, it changed her viewpoint.”

A visitation was held Friday Aug. 22 at Jefferson Funeral Chapel. The funeral followed on Saturday Aug. 23 at Olivet Episcopal Church in Franconia, where Keating had been an active member and lay reader. Her burial will take place at a future date at Arlington National Cemetery. Contributions in her memory may be made payable to Franconia Museum at 6121 Franconia Road, Franconia, VA 22310.