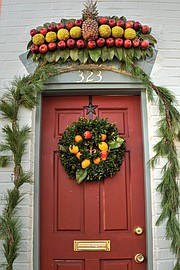 The 2013 3rd place winner featured a Williamsburg-inspired fruit board above the door complemented by a boxwood and magnolia wreath decorated with apples and citrus fruits. A pine swag framed the door, tying the design together with holiday greenery.

Members of the Old Town Walled Garden Club will be strolling down the streets of the Old and Historic District of Alexandria the week of Dec. 7, identifying the most striking door decorations in town, and choosing the winners of the 47th Annual Holiday Door Decorating Contest. The first, second, and third place winners will be awarded prizes from Patina Polished Living on Franklin Street, Metro Stage on North Royal Street, and Trastevere Antiques & Collectibles on Cameron Street, respectively. Contest rules are as follows: Except for bows and ribbons, decorations must be made from natural materials by the homeowners themselves; purchased professional arrangements are not eligible to win. Judging criteria include originality of design, scale, color, contrast, and attractiveness from the street.

“It is the hit of the Christmas season to see which of my neighbors has won the wreath making contest,” said Betty Spar, a former judge for the contest. “Some are so spectacular … amazing. It definitely kicks off the Old Town holiday season.”

“Last year, the club received an email message from someone from out of state who was planning a trip to Alexandria. She wanted to know when the contest winners would be announced so she could see the winning doors while she was in town,” said Cathy Cotell, president of the Old Town Walled Garden Club.