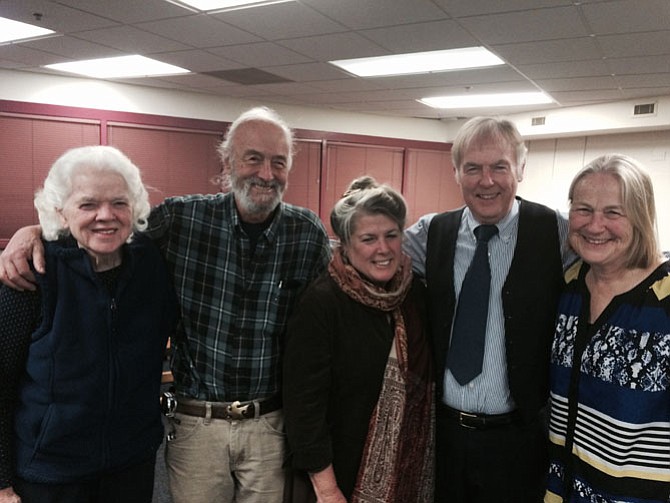 Whatever one likes about Potomac, Callum Murray probably had something to do with keeping it that way. That was the message at last week’s West Montgomery County Citizens Association meeting, marking Murray’s plan to retire.

What Potomac looks like, from tree-lined streams to rustic roads, from larger lots to limited commercial development is guided by the Potomac Master Plan, dated 2002 and authored by Callum Murray, lead planner for Potomac and the Agricultural Reserve for Montgomery County Park and Planning.

Susanne Lee, president of West Montgomery, presented Murray with a crystal decanter, engraved: To Callum, Our Hero, Always. It was the Dec. 10, 2014 meeting of West Montgomery. Once a year, Callum Murray presented an update on planning in Potomac to the group, but this year, that presentation was more informal.

Susanne Lee, president of West Montgomery, suggested that possibly the correct tribute to Murray would be to read aloud the 262-page master plan written in 2002. Here is how it begins:

"As Potomac has evolved from rural and agricultural to a semi-rural and suburban subregion, it has retained much of its green character and environmental qualities. These qualities are under threat. Inexorable population growth continues to foster intense development pressure on the Potomac Subregion. This Master Plan strongly recommends that sustaining the environment be the pre-eminent policy determinant in a subregion so defined by its natural resources. New development and redevelopment must respect and enhance the Subregion's environmental quality, while helping to build communities and resources that will serve existing and future generations of residents."

Lee talked about how it feels to be a citizen activist in a meeting with developers, land use attorneys and elected officials. “You come out of those meeting with the men in suits and you feel like you can’t ever have as much influence as they do.”

But Murray and the Master Plan made all the difference, Lee said. “Callum, you gave citizens an insider influence, and you watched out for us. … Bad things haven’t happened here because of the Master Plan.”

Murray was born in Scotland and worked as a planner there for 15 years before coming to the United States. His first day working for Park and Planning here was Dec. 19, 1988. Murray related that in 1998, when he finished the contentious Friendship Heights Sector Plan, a colleague asked what he’d been assigned next. When Murray answered the Potomac Master Plan, the colleague replies: “Wow, you must have really ticked someone off!”

In 2000, he began the process of rewriting the Potomac Master Plan for the first time since 1980. At the time, several transportation proposals threatened Potomac’s equilibrium, including a possible techway leading to a new bridge across the Potomac River near Blockhouse Point, widening River Road to four lanes from Piney Meetinghouse Road to the Beltway, plus widening many other Potomac roads.

But Murray set the stage by defining Potomac’s role as a “green wedge,” providing a critical environmental buffer along the Potomac River, thus protecting the region’s drinking water. This emphasis on the environment served as the underpinnings of a plan that maintain’s Potomac’s semi-rural setting. The Potomac Master Plan Advisory Committee included Elie Cain, Ginny Barnes, Diana Conway, Robert Hanson and others who continue to advocate for the the environment and the low density vision for Potomac.

“It was really a wonderful ride. Thank you,” said Elie Cain to Murray at last week’s meeting.

Murray has also overseen the implementation of many things envisioned in the Master Plan over the years, including adding hundreds of acres of parkland, plus guiding the needed housing and other density in places with access to transportation, for example at Potomac Park Place (site previously called Fortune Park) and Quarry Springs in the former Stoneyhurst Quarry.

For the future, Murray, who cannot string two sentences together without a funny anecdote in between, said Potomac is in good hands, with both experienced planners and what called Millennial planners, who are, “smart, ethical, idealistic, good with technology and ride their bikes to work.”