Groundwater contamination and a swell in volunteerism. 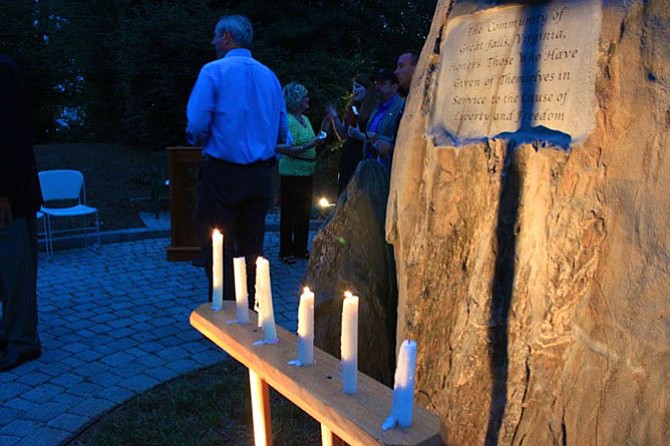 The candles lit after the Great Falls 9/11 Memorial Ceremony. Photo by Reena Singh.

In the past year, the village has gone through changes that will impact the future of the community.

2014 in Great Falls saw an uptick of volunteer support, walkability in the village center and a corrective action plan for the Methyl tert-butyl ether (MTBE) groundwater contamination.

“I feel like we saw our volunteer base start to grow, and that’s an important thing,” said Erin Lobato, director for Celebrate Great Falls (CGF).

Earlier this year, the same group of volunteers would be at all the events from dusk until dawn making sure they were setup and then broken down. However, more people are beginning to get involved ever since the Independence Day fireworks were canceled this year due to lack of volunteers.

Several Boy Scout troops have gotten involved in the events as well.

“I love the fact that younger people are getting involved, because it shows them how important connectivity is in the community,” said Lobato.

THIS YEAR was the first year CGF started its adults only wine tasting - an event Lobato said was a smashing hit and will happen again in February, becoming another annual event in the village.

“We had our first winter wine tasting at River Bend,” she said. “It generated a lot of buzz early on. We sold out tickets a week before the event.”

She said the event became a way for neighbors and friends to catch up with one another.

“I think it will be a nice new tradition to look forward to in the dead of winter,” she said.

Another change that resulted in connectivity was the Walker Road diet - reducing the lanes on Walker Road to add streetside parking and create better walkability in the village center.

“It brought the two halves of the village together,” said Great Falls Citizens Association Vice President Bill Canis. “We’re putting the walk back into Walker.”

According to GFCA Communications Coordinator Phil Pifer, many people felt uncomfortable crossing the street to head either to the shopping center or the village green.

“The traffic was out of control,” he said. “Very fast.”

In addition to creating more walkability with the zebra crossing, the speed limit was reduced to make sure vehicles were traveling at a safe speed through the area.

Big changes are happening under Walker Road as well. In November, GFCA called on Kleinfelder to tell the residents how they plan to speed up the MTBE cleanup. MTBE is an odorless liquid suspended in gasoline that has inconclusive tests on whether it is a carcinogen.

However, about 80 percent of the village residents are on a well water system and what they do know is that the State Department of Environmental Quality has a zero tolerance policy for it.

He said the board has worked hard over the last few years to get a corrective action plan going after years of studies.

“I think it’s momentous, because we are a well-based community,” said Canis. “Very few communities go toe-to-toe with the state. We pushed the envelope in ways that would have never happened otherwise.”

ON THE TECHNOLOGY FRONT, the citizens association also launched a new website, lead by Pifer, to create better communication between the civic group and the community.

More ways to communicate via the website will be unveiled further next year as social media begins to be a resource.

“The point is to create a more effective communications vehicle for us,” said Pifer. “This allows for more two-way dialogue.”