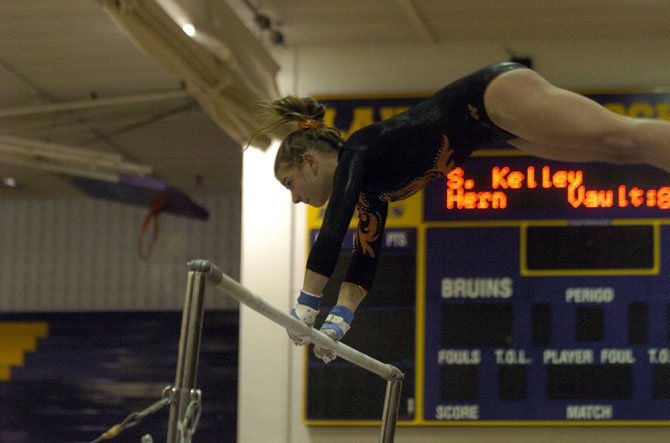 Hayfield sophomore Molly Overstreet struggled to get to this point and things weren’t getting any easier.

Overstreet, who missed three weeks during the season after suffering a concussion, began her bar routine during the 6A North region gymnastics meet on Tuesday at Lake Braddock Secondary School when the equipment dislodged from the floor. After the routine, Hayfield head coach Val Taguding submitted an inquiry requesting Overstreet receive another opportunity due to equipment failure. Judges granted Overstreet a second chance.

“There was a process and it took a while,” Taguding said. “By then, they had to keep going with the rotation, [so] Molly had to wait another rotation just to even find out and by then she was also cold.”

Despite less-than-ideal circumstances, Overstreet made the most of her opportunity, receiving a first-place score of 9.75.

“I feel accomplished,” she said after the meet.

“She is one of the toughest kids that I’ve ever seen.”

Winning the region championship on bars and earning a trip to the state meet is the highlight of an otherwise tough season for Overstreet, who suffered a concussion while warming up for a meet at Oakton High School on Jan. 9. She experienced symptoms for a week and it took three weeks for her to be cleared to return to action.

“I definitely fell behind,” Overstreet said. “... It definitely put me back.”

Last season, Overstreet was a vault state champion, finishing in a three-way tie for first with Princess Anne’s Helaina Dollins and Western Branch’s Jamie Stone with a score of 9.8. She was a level-9 club gymnast with Apollo Gymnastics, but quit prior to the 2013-14 school year.

After her return to action this season, Overstreet wasn’t herself during the Conference 6 meet. She failed to qualify for regionals in the all-around, but she did manage to earn a spot on bars. On Tuesday, she made the most of her opportunity and will compete at the state meet on Feb. 22 at Salem High School in Virginia Beach.

“She is one of the toughest kids that I’ve ever seen,” Taguding said. “She had a broken back last year and was state champ on vault and that says it right there. She had to fight back just to get to states last year and she had to do the same thing this year. … When the bars gave out on her, she kept going. She’s just so quiet that one of our other coaches had to say it, otherwise she wouldn’t have said anything.”